How do these expenses for living in Cambodia compare to yours?

A while back I put out a book on cutting your expenses in half by moving abroad. (Get it here!) In the course of that, I interviewed loads of expats living in different countries. If you pinned me to the wall and said I had to tell you which country was the absolute cheapest place to live in Southeast Asia, Cambodia would be the answer. It’s one of the cheapest places to live in the world really, edged out by just a few. If you’re earning a couple grand in passive income, this could be your spot for a four hour work week.

On top of the cheap living and the pure ease of getting things done, this used to be a country that let you easily stick around for a while. When I interviewed Justin Garnett for the book he said, “You just pay a little extra when you arrive for the upgrade. Then you can extend for a full year for $280. From there it’s very easy to rent a space and open a bar, a restaurant, or a service business. As long as you don’t do anything stupid, it’s no problem.”

Alas, easy visas you can get at a motorbike shop or travel agency seldom last, especially in an election year when candidates need to talk about crackdowns. Those nasty immigrants are always a good target.

While this used to be one of the easiest countries in the world to work legally, in 2018 the visas regulations have changed and are actually being implemented this time around. Foreigners who want to stay in the country long term will now need a work permit to extend their visas for 6 or 12 months. There are ways around it, but you can’t just show up and get a one-year visa anymore just by paying a couple hundred bucks.

It is still easier to live in Cambodia on a tourist visa than it is in Thailand, with less frequent border runs, but assume you will only be able to stay six months at most after arrival, with extensions, less after you have been here a while. Here’s how local resident Jen Joslin explained it in her post on living in Phnom Penh, the capital.

Currently, getting an Ordinary (E) visa is as simple as showing up at an airport or land border, ticking a box, and paying a few dollars more than the Tourist visa price. You need an Ordinary (E) visa if you want to extend your stay in Cambodia for more than one month. You can extend that visa to a three-month E visa one time without leaving the country. If it is your first time in Cambodia, then you can extend your Ordinary (E) visa for a six month (E) visa one time. Otherwise, to get an (E) visa for 6 months or one year you now need to have a government-issued work permit.

If you do qualify, your business visa is good for one year.

Apartment and House Deals in Cambodia

As with anywhere you’d want to live, it pays to take your time finding a place to stay to get the best deal. If you look online though, the prices are quite reasonable even for those in a hurry. In Phnom Penh, the most expensive places are right by the river and you can pay as much as you do now if you want. But they go down quickly as you count the blocks back from there. It is common to spend $300-$400 for a one-bedroom condo and $400-$650 for one that has several bedrooms and lots of facilities. Naida Dizdarevic, Regional Director of Operations for Journeys Within, a Wild Frontiers Company, pays $350 a month for her “one-bedroom western style apartment in a good area” of the capital. She pays $30 to $50 a month on utilities.

American couple Jen and Stevo live near the Russian Market in Phnom Penh, another popular area for expats with lots of great restaurants and bars. They pay $400 plus about $75 in utilities per month for a one bedroom serviced apartment with a rooftop gym and weekly cleaning service. They spend about $1600 per month for both of them to live in Phnom Penh, all in.

In Siem Reap prices are far lower. If you spend $600 there you’re going to have a swanky villa with a pool, all utilities included. Most of the condos and apartments you can find online range from $250 to $550 per month. Go to a smaller town with fewer tourists and it drops again from there.

When I asked Humphrey what he spends on a regular basis, he stressed that he was living large and wasn’t very careful with his money. “I earn about $2,000 a month and I spend about $1,500,” he said. Even in the nicest bars, it’s still 50-75 cents for a half pint of beer. Liquor here is cheaper than at duty free in an airport. If you spend more than $4 on a meal it was a very fancy place. Women are cheap, but I’m not a player now,” he insists. “I have a girlfriend.”

“There are plenty of dirty old men on a pension down at the beaches though,” he adds, “and I know a few that easily get by on $1,200 a month. They live well on that amount.”

Justin is a family man, so his story is very different. He’s got a house full of relatives in the compound, a place where he spends around $750 on rent, utilities, and maintenance for a 4-bedroom house “with a huge garden.” He estimates that he probably spends $3,000 a month supporting the extended family of his wife he met here, along with his own kids, but can’t imagine going back to his old life in Australia. “I pull up to the house and the kids run inside. I always know there’s someone to take care of them. We’ve never ever paid a babysitter.”

He now has a vacation getaway place he made happen from his savings. “I bought a block of land with a 3-bedroom house that needed some improvements,” he says. All told I’ve spent $21,000 and I have an acre of land. If you buy land somewhere, you can build a home here for 10 grand.” 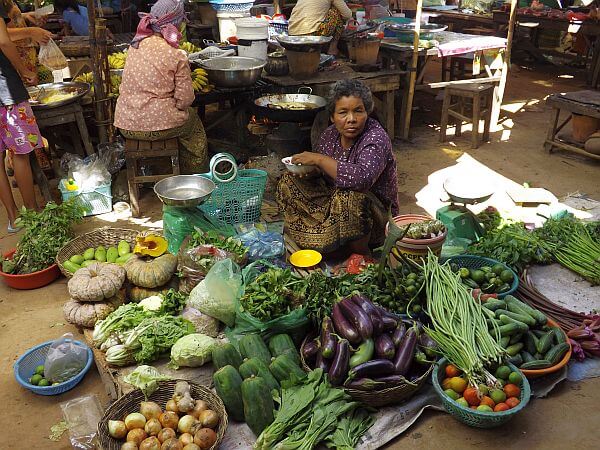 I also interviewed a hotel manager living in Siem Reap who was just plain flabbergasted at how cheap it was where he was living. “I don’t know anyone who pays more than $500 a month for a nice large apartment or house here,” he says, “And even if you run the air conditioning 24/7 you won’t be able to spend more than $300 per month on all utilities added together.”

He has worked in several other countries in Asia and can’t imagine spending less than he does now on food and drink. “I cannot think of anything outrageously expensive except some imported food stuffs.”

Food, Drink, and Transportation in Cambodia 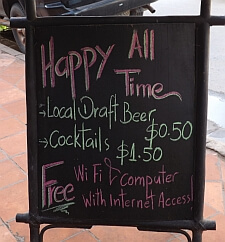 Naida says she spends about $200 a month on groceries, but that’s deceiving because she eats out so often. “Entertainment is my biggest expense as people tend to meet out instead of at home. I would say I spend around $500-600 a month.”

It won’t cost you a whole lot when you do eat out though unless you go upscale. You can eat with the locals in the market for around $1 for a simple one-dish meal with rice. It’s relatively easy to find a meal with multiple items for $3 or go to what would be considered a “nice restaurant” at home for well under $20 for two, including drinks. Those drinks won’t set you back much either: beers are often less than a buck and you have to be in a swanky place to top the $5 cocktail level.

Market prices are super cheap, with $1 easily getting you a kilo on standard items like fruit, vegetables, and rice. Naturally you’ll pay a lot more for imported items though.

For transportation, most residents end up doing what the locals do and using a motorbike to get around. Naida says, “I cycle around town but spend around $50 a month on tuk-tuks.” A trip of a mile or two will run you $2-$3 in a tuk-tuk or taxi. A motorcyle taxi will be half that amount if you’re willing to jump on the back of someone’s seat.

Getting to another city in Cambodia won’t cost you too much. A reasonably comfortable bus ride will generally range from $4 to $12, the latter being the best available on the longest route.

What Are the Downsides?

Cambodia is not for everyone, of course. It’s a hot tropical country with the bugs and diseases that implies. Most people fly to Thailand for serious medical care, though you can get the basics done here.

This is one of the world’s poorest countries for a variety of complicated reasons, but it’s unique in the world that the Khmer Rouge killed off everyone who seemed intelligent, including doctors, professors, engineers, and architects. People are reluctant to acknowledge the outcome of that with the following generations, but it’s clearly going to take a very long time to recover and catch up with more developed neighbors. Add in the war in Vietnam, lingering land mine injuries, and a dictator who has been in office for more than three decades and there’s a big hole to climb out of. This year the sole opposition newspaper lost its independence, selling to the owner of one of the government’s own PR firms.

You can expect the infrastructure to be less than ideal, which of course is true for almost any place where you can live abroad for cheap. Bureaucracy will be a pain, toilets won’t be as nice as you’d like, you can’t drink the tap water. The beaches here are okay, but they don’t compare to those in neighboring countries. This being the tropics, it’s pretty much always hot and steamy outside, so you need to be okay with that.

Do your homework and give the place a trial run before making a move to live in Cambodia. If your funds are limited, however, this is probably the best bargain in Asia outside the Indian subcontinent.

This post originally went up in 2014 (I have left some old comments that were evergreen) and was updated in May of 2018.

Want to hear about the best opportunities for cutting your expenses and having a better life? Subscribe to the Cheap Living Abroad newsletter! Or pick up A Better Life for Half the Price and start living well for less instead of dreaming about it.

What it Costs to Live in Thailand: Expats and Nomads Speak

Living in Bali – Costs and Best Places for Expats