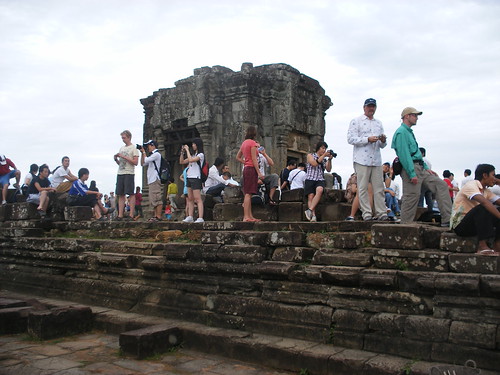 My one big huge regret from my three backpacking trips around the world is that I didn’t make it to Ankor Wat. Every time I was in nearby Thailand or Vietnam, there was some kind of unrest going on in Cambodia, with State Department warnings and all that. Plus after being regaled with dozens of tales about the horrible, bone-crushing roads with potholes the size of VW’s, we gave it a pass.

I know now that when I could have first gone, in the mid-90’s, was a magical time to visit. There’s a great article in the July issue of Condé Nast Traveler, by Christopher R. Cox, called Asia’s Last Edens. A year-by-year graph in there (which can’t effectively be duplicated online—a big drawback of the web) says that in 1993, there were 7,650 foreign arrivals in Siem Reap. Total! In 1994 there were seven hotels. Total!

The graph climbs from there, to $100 million in tourism income in 2003, a total of 68 hotels in 2004 (and the first Irish pub), an international airport terminal in 2006, the third golf course in 2007, and in 2009 comes the kicker: 118 hotels with 8,935 combined rooms. With almost no regulation in place, the effect has been devastating, especially to the water supply.

Fortunately for you, most of those visitors are in a hurry. They pop in, hit the main sites, get a massage, and then go to the next spot on the list in another country entirely. If you take your time and avoid the mad rush that package tourists are on, it’s easy to get away from the throngs.

This being a Conde Nast Traveler article, there are the usual contradictions of trying to advise people responsibly while at the same time telling them to stay at a water-sucking luxury hotel. (Advice for keeping it real—“Ask you hotel concierge.” Advice for going with a group or guide—“Ask your hotel concierge.”) When the editors weren’t inserting these kinds of brilliant nuggets to please advertisers appearing next to the article, however, the author really does get some good recommendations in there for seeing more in a responsible manner.

TravelFish.org is the best resource for in-depth travel in Cambodia

Angkor Wat is one of the best travel destinations for history lovers. So many amazing temples can't be seen anywhere else. Siem Rap is a great place to stay, because you will need a couple of days to discover Angkor Wat.

cambodia is a teriffic country for cheap travelling. the people are friendly plus there are many unbeaten tourist tracks.