If you want to get a bit off the beaten path in Mexico but tour an area with lots to see and do, head down to Patzcuaro and Janitzio Island in the central part of the country, south of Guanajuato state and one state over from Estado de Mexico—where the capital is located.

I recently made my second trip down to Patzcuaro, a small “magic town” colonial city in an artisan area outside of Morelia in Michoacan, Mexico. There’s one time of year when the town is bulging with tourists–around Day of the Dead–but then the rest of the year it’s a steady trickle of mostly domestic tourists, with just a smattering of foreigners.

The first time we visited was on a family vacation with my daughter many years ago. We took a series of buses from Guanajuato to get here, stopping off in Morelia first. These days the bus routes have gotten even less convenient, plus Covid and all that, so we rented a car for my wife and I to tour the area.

That turned out to have added benefits. Last time we went on a tour with a local driver, but this time we were free to come and go as we wanted, spending as much or as little time as we wanted in each village.

The Artisan Villages Around Patzcuaro

Sometimes one person can alter the course of a whole region and that was the case with Bishop Vasco de Quiroga, who arrived in the area to clean up a nasty mess. The conquering Spanish had brutalized the local people across a wide swath of territory and that sent many of the people into hiding, including the Purepecha artisans with a long tradition in the region, a history going back many centuries.

It’s not that they were excluded from producing other items, but by specializing in one type of work, they could collectively avoid some of the inevitable cut-throat pricing competition that comes when there are too many players making one thing. Plus this would keep the level of quality high.

Amazingly, while the villages and items evolved a bit over the years, the same general system is in place now that was set up in the early 1500s. In some cases, the villages are still producing the same goods they did back then, sometimes with very few changes in the techniques. If you tour this area, you can shop for different things in different places, prioritizing your visits by what you’re in the market for.

The most successful outside of Patzcuaro, from both a tourism perspective and an economic one, is the town of Santa Clara del Cobre. This is the copper handicrafts area and there’s a huge range of items available, most of them formed by hand with a hot fire or oven and a hammer. They make everything from cooking vessels to bathtubs out of copper.

You can see the process in action at the Copper Museum in the town center. If you’re timing is right you can see an artisan in action and we got to take a crack at hammering some of the hot metal ourselves. This can be hot and tedious work, which made me appreciate the outcomes even more.

While I’d love to have one of their awesome copper sinks in a bathroom someday, for this trip I had to be content with a couple of Moscow Mule copper cups I could get home easily.

There are a few nice restaurants and hotels in town and one shop in particular was calling my name: the owner makes his own craft beer. When I do buy that copper sink someday, I’ll crack open a beer while I’m shopping around and haggling over the price.

We also picked up some basket-style lampshades from the town of Tzintzuntzan, whose main claim to fame is brown Mexican ceramics made in the traditional style. They’re used to hold various kinds of stews in traditional Mexican restaurants in the central part of the country. A village nearby makes items out of woven reeds though that you can also find for sale here. Plus we lucked out and stumbled upon a big festival going on.

It would be worth spending more time than we did in Tzintzuntzan because there’s also an archaeological site up on a hillside above the lake that we visited the first time and it was impressive, with nobody else around. The cemetery here is a popular one during Day of the Dead tours.

On our first trip around the lake with a guide many years ago, we visited Tocuaro, a center for making masks, and picked up a red devil one with horns that is now a part of our wall collection. From that guy pictured in this post.

This time we picked up two really cool Catrina statues from a workshop where they make them in the sleepy town of Capula, cutting out all the middlemen and getting a great deal in the process. It was hard to choose since there were a lot we hadn’t seen anywhere else. We especially loved this one with a monarch butterfly migration theme (the best place to see them in Mexico is in the same state of Michoacan).

We didn’t go to Paracho, which is the musical instruments town, but apparently we’re one of the few that missed it. Thanks to the Pixar movie Coco, lots of visitors make a pilgrimage here to see the hand-made white guitars like you see in the movie.

The Pueblo Magico of Patzcuaro 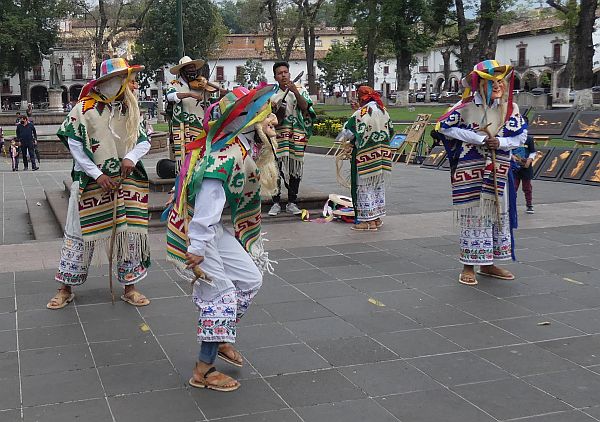 I really enjoyed Patzcuaro the first time I visited and it was even better this time around. There seemed to be a few more nice restaurants and a nicer selection of items to buy in the shops. The main draw of the city though is what you see while wandering around. It’s a low-slung version of Spanish Colonial architecture, with most buildings only being one or two stories and all rather uniform in their look: white walls and red clay tile roofs.

Most of the shop signs are hand-painted on the outside and the streets signs employ the same artistic design, so it’s a really attractive place to walk around and photograph. If you’re lucky you’ll catch some traditional dancers in the main square, always wearing the pink masks and a specific hat that’s identified with this region.

There are some beautiful plazas here that are nice spots to relax and watch the daily life of the city. Some of them have cafes where you can sit outside. The main square here is more open than most in Mexico and is a hub of activity.

There are a few soaring churches that have been here for hundreds of years, plus a library building with an incredible mural worth seeing. If you want to get some exercise, there’s a nice shady hike up to an overlook area where you can take in the whole city and the lake.

What I didn’t find many of were bars. This is one of the few places I’ve been in Mexico that’s not loaded with them. It’s also the quietest city I’ve been in by far as a result. Everything is closed up by 9:00 or so most nights.

I don’t think I’d want to live here for more than a few weeks. It’s too isolated, too sleepy, and the weather is not as nice as where I am now: a good bit rainier for a start. We stayed with some friends who live there though and they like it a lot. There’s a small community of foreigners in Patzcuaro, Mexico, including some that run hotels and inns.

The rates are a bargain here, including hotels and restaurants, as long as you don’t come during Day of the Dead. Then the prices shoot up since everything gets booked. Check Patzcuaro lodging prices here.

An Excursion to Janitzio Island

One of the most interesting excursions to take that doesn’t require a car is a boat trip out to the island of Janitzio. Rising out of the lake of the same name, the island is covered with houses of the people who live there, then is topped by a big statue. The boat launch is not right in town, so it’s a very long walk or a short taxi ride to get there, but neither a ride nor the boat will set you back more than a few dollars.

On the way you might see some water birds and some fishermen throwing out their nets to create a nice photo for the tourists passing by. Most of those tourists will be Mexican, by the way, and you might end up with a few musicians on your boat playing for tips.

Stepping off onto the island, you follow the crowds and head up to the top where the statue is. There and all along the way are places to eat, drink a michelada, and hear some music if you’re interested. The local cemetery is definitely worth a visit and the local church has plenty of character. Check out my video tour here:

It’s easy to sort out this trip and there’s no must-go restaurant on the island. Just pick a place that looks interesting and take your chances. Prices are very reasonable so you’re not taking much of a flyer with your lunch money. There’s street food available at the top of the hill.

If You Go to Patzcuaro

This area has had its ups and downs over the years with cartel issues in Michoacan, so you’ll find plenty of people who want to give you advice on why you shouldn’t go there. As a result, crowds are generally limited (except around Dia de los Muertos) and prices are quite reasonable. Like I said though, we drove around for days with no issues and never felt unsafe.

The hardest part is getting there. The bus schedules aren’t very convenient unless you’re already in the capital city of Morelia, so the best bet is to combine this with a visit there. Even getting to Morelia isn’t convenient from a lot of cities, however, unless you fly or take a bus from Mexico City. So it’s often easier to rent a car at the Leon/Guanajuato Airport or in Morelia. Check prices here and remember that you usually have to tack on liability insurance in Mexico.

My friend Betsy McNair runs a tour company in the area that has lots of connections with local artisans. Schedule something with her if you’re intending to do some serious shopping or just don’t want to leave to chance that you’ll see the local craftspeople in action.

Check your options for Patzcuaro hotels or VRBO rentals at those links.