I have yet to make it to Poland—the closest I’ve been is seeing it from the other side of the river in Slovakia. So this article on the cost of living in Poland is a guest post from Polish native Agness Walewinder of eTramping.com. Take it away Agness!

Moving to a foreign country for whatever purpose can seem quite scary at first. You would be abandoning everything you are used to and starting all over again in unfamiliar territory. But with proper research and adequate information, you can make a soft landing at your new home in Europe and enjoy a reasonable cost of living in Poland.

Living in Poland can turn out to be a great adventure. For people who don’t have Polish roots or zero knowledge about Poland, moving in at first might prove to be tricky. However, once you settle in and understand Polish laws and way of life, the whole process becomes a breeze.

Whether you consider moving to the capital Warsaw, beautiful Krakow, student-city Wroclaw, coastal Gdansk, Zakopane in the mountains, or a little town of Zagan, Poland can provide you with whatever lifestyle you most enjoy.

Note that since most of the readers of this Cheapest Destinations Blog are from the USA or Europe, we’ve posted prices in euros. To get the cost of living in Poland in US dollars, multiply the price here by 1.15 to get a ballpark idea (since the euro to dollar rate is always in flux).

Polish Visas for Visitors or Residents

There are certain visa requirements for expats who would like to work or live in Poland long- or short-term. These requirements differ by nationality and can be found on the Polish government site.

Poland is part of the Schengen Area (passport-free zone for EU nationals), and if you’re a citizen from one of the 26 member countries, you do not need a visa to enter the country—only your passport.

Certain countries’ citizens do not need to apply for a Schengen Visa to enter Poland. You can check if you qualify for this online or through an embassy. Take note that the Schengen Visa only allows you to stay up to 90 days in Poland of 180 days total. (In other words, you have to leave the Schengen zone for 90 days before returning to any country in it.) If you’re planning on staying even longer than that, you will need to apply for a regular visa through immigration.

Although Poland is a member of the European Union, they are not a part of the Eurozone. The official Polish currency is the zloty (PLN), which 1 zloty = 100 groszy (cents). Though euros might be accepted in certain tourist hubs and big cities, you should use the local currency or face the risk of overpaying for something. But you can still use your debit or credit card to settle bills if needed and get a reasonable rate if your card doesn’t charge foreign transaction fees.

In Poland, you can exchange currencies at a Kantor (currency exchange office). The rates vary and are dependent on the location, with places like the airport and train station being less favorable for exchange. It’s highly recommended to withdraw cash in advance before heading to the outskirts of town or rural areas as it might be harder to find an ATM (Bankomart) there.

Fun tip: try not to give away all your zloty coins while paying. There are certain services such as a pay toilet that would require coins. 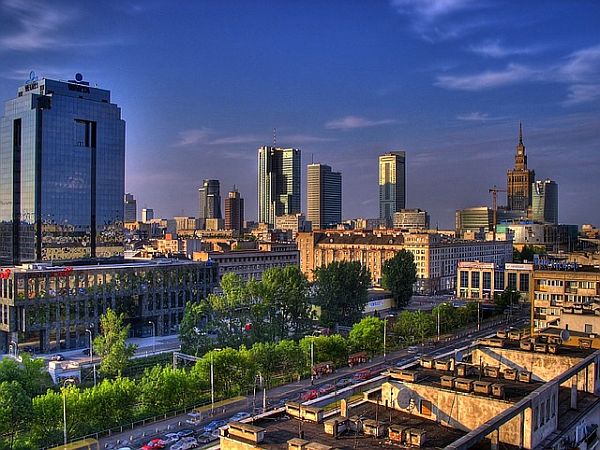 Daily Cost Of Living in Poland

The cost of everyday expenses while living in Poland is quite cheaper in comparison to some other European countries. However, your cost of living per month is also subject to personal preferences and tastes. Here are a few estimated living costs:

The prices for renting an average apartment vary from city to city. Renting a place in Gdansk, Warsaw, Krakow, and Wroclaw would get you the most value with Warsaw being the most expensive. According to recent statistics, the average range for rental apartments in Poland are as follows:

You would find that flats are cheaper in Wroclaw, Gdansk and Krakow, at the low end of that scale. In the less popular cities like Katowice, Poznan, and Lublin, the rental should be around 1,800 zloty (€387).

Of course, these are approximate and average prices. The final price is subject to several factors such as:

You also have to register your place of residence by law. If you are staying with a host, he/she should be able to guide you on how to complete this process.

Buses in Poland can cost you an average of around 80-120 zloty (€17-€25) per month. The phone app “jakdojade” can be helpful in buying and validating your bus ticket. It is useful in cities and can be used to plan a trip between addresses. It also has a map that shows you different routes.

If you are boarding a taxi, pay attention not to board unregistered or unmarked vehicles as they tend to overcharge foreigners. Registered taxis always have a cash register and meter. As an expatriate, a quick method to avoid being overcharged would be calling in or using an app to book a taxi in advance.

If you’re an expat from the EU, you are permitted to drive in Poland with your country’s driver’s license. Other citizens would need to request an International Driving Permit for the first six months before applying for a Polish driver’s license.

The cost of food and personal care shopping varies greatly depending on a few factors:

Due to availability and seasonal demand, it is not uncommon for the prices of vegetables and fruit to fluctuate. For example, a kilogram of tomatoes can cost as low as 5 zloty (€1) in summer and as high as 15 zloty (€3.23) in winter. However, grocery shopping is quite cheap in Poland when compared to  countries further west in Europe.

If you’re not sure about going to a store due to the language barrier, then you can try shopping for groceries online. There are several stores online available in English to make your shopping easier. They always have fresh foods, fruits, and other supplies. Another bonus is they can deliver right at your doorstep.

When it comes to eating out at restaurants or ordering meal delivery, there are some budget-friendly options. A cheap combo meal will typically cost around 22 zloty (€4.74) in fast-food chains like McDonald’s or a basic restaurant for locals. It will cost you about €6.50 – €8.60 per person to have dinner at a mid-class restaurant. Try to avoid eating out in tourist areas as they can be quite pricey. You can check out restaurants online as well as the customer reviews before choosing.

To be treated under the national healthcare system, you need to be Polish or apply for public health insurance. If you’re an EU citizen, you can also show your European Health Insurance Card to get medical treatment during a short stay. The toll-free polish emergency number to call is 112, and they have services in both Polish and English.

For employed expats, your company should be able to handle this for you by giving you a relevant certificate (make sure to confirm this). Self-employed expats who are eligible can also visit the regional NFZ office to sign up for this public healthcare system. If you’re unable to sign up for national healthcare, you should consider paying for private medical insurance, either some kind of expat health insurance or a local plan. Without any of these two, you stand the risk of paying an unsubsidized rate for public healthcare and experiencing a delay in treatment.

Private healthcare would cost you double or more without insurance, and you can expect to pay between €21.50 and €32 for just a consultation, which can really add up.

Phone and Data Communication in Poland

In Poland, you can either get a prepaid phone SIM or pay for a subscription. As a foreigner, you need to present an official ID or passport to purchase a prepaid SIM card. This option is advisable for individuals who do not want a contract with a telecom operator or who just need a phone to stay in touch occasionally. SIMs and data can range from 30-80 zloty (€6.50-€17) a month, depending on how much data you need.

To own a Polish mobile subscription as an expat can be quite complex. A foreigner would need to visit the operator’s office with a set of documents. You will need to show your work permit, a current phone bill or valid credit card, residence card, and a passport. But it is more convenient to choose a subscription package if you’re in the country for a long time.

Do note, if you own a temporary residence card, you may only be able to choose a subscription plan valid for your stay period. Calls within the same operator network are cheaper and sometimes free. A few of the popular mobile brands are Orange Polska, Play, and T-Mobile.

The average cost of home internet service ranges between €11 and €22 per month. You can sign a contract with an internet service provider, who will typically offer packages for both Cable TV and internet. The cost of internet access from different providers differs by location.

In Poland, there are many areas in the city where you can find free WiFi, such as public parks, restaurants, train stations, and even at bus stops. The Internet is greatly accessible here, so even if you do not have cellular data, it’s still possible to stay connected on the go.

Other Points Worth Noting on Living in Poland

Poland has done well since shedding communism and has a higher GDP per capita than many of the other European countries that became independent around the same time in the early 1990s (after Poland really kicked off the whole movement.) Overall though, the general cost of living in Poland is cheaper than in other countries in the EU.

In Poland, you would find a friendly and welcoming environment with a higher than average standard of living. You get a lot for your money and the cost of living in Poland vs. the US is significant. Krakow is about the same size as Seattle in population but according to Numbeo.com, “You would need around $2,488.25 in Krakow (Cracow) to maintain the same standard of life that you can have with $6,700.00 in Seattle, WA (assuming you rent in both cities).”

While the prices in the article are current estimates, you should expect slight differences subject to the exchange rate and whatever city or town you decide to move to. Naturally, the amount of apartment comfort and imported food you require will impact the costs.

For maximum immersion, you can try to learn Polish (though it’ll be quite difficult at first)—it’ll definitely make life easier for you there, especially if you want to keep abreast of the local news. Poles may learn Russian or English as their second language, but it’s still better to build rapport with them in their native language!

Agness Walewinder is the co-founder of popular adventure travel blog eTramping. She has been traveling for nine years, working as a digital nomad and online entrepreneur.

Originally from Poland, Agness has currently visited 70 countries and counting inspiring hundreds of her readers and followers to get out there and live life to the fullest.

Thank you for the information.