In much of the United States, it’s tough to get around without your own wheels. There’s one major exception to that problem though: the northeast. If you land at JFK or Newark airports, as many foreign visitors do, you’ve got lots of options for bus and train trips from NYC you can take advantage of.

Many travelers who are coming from places with great transportation systems are surprised at how difficult it is to get around the USA without a private vehicle. In many countries around the world, it’s easy to travel without your own car because there are great bus, train, and ferry systems. Even next door in Mexico, I don’t have or need a car. If you check a route on Rome2Rio for where you’re headed internationally, you’ll find plenty of options.

The USA is a fairly new country though and most of its growth has happened during the age of the automobile. All but the oldest city centers were built for cars. This is the original land of suburban sprawl. The government only funds infrastructure in spurts and spends more money per kilometer just on the basics than any other country in the world. Never mind those shiny high-speed rail systems like you see in Europe, Japan, and China. Getting anything besides a highway done in America takes years longer than in most other nations and costs more. The result is that our public transportation system can best be described as creaky, antiquated, and woefully inadequate.

Thankfully, the cities of Boston, New York City, and Washington, D.C. made public transportation a big priority from the start and have continued to invest in it over time. Since these, plus Baltimore, Philadelphia, and the Erie Canal cities were also already booming during the golden age of rail travel, they are connected by what’s left of our passenger train system as well, including Amtrak lines that are sometimes faster than the slow normal ones. Last, most of these cities have a train to the city center right from the airport, so you don’t need a car or taxi when you arrive or when you’re flying home.

Use these ideas below as a starting point on where you can travel from New York City by train or bus and remember that if you’ve got the patience, you could make it all the way to California or down to Miami or New Orleans without ever getting in a car. Just bring a good book or two as it’s going to take a while…

The New York City Tri-state area has an extensive commuter rail system serving all the people who come into Manhattan from suburban areas in New Jersey, Connecticut, and Long Island. Those connect to subway systems serving the city itself as well as nearby Jersey communities such as Hoboken and Jersey City. So if nothing else, you can take a world culinary tour by visiting immigrant communities scattered around. You could eat a Ukrainian breakfast, a Jamaican lunch, and a Russian dinner just by picking the right train stops. Then do three more nationalities every day for weeks.

Otherwise though, most of these stops are not major tourist attractions unless you count hanging out with the hipsters in Brooklyn and visiting the museums and botanical garden there. One exception would be the train trips from NYC to the beaches: you can take a Long Island Railroad train to Fire Island, The Hamptons, or Montauk, where the wide sandy beaches are quite nice. 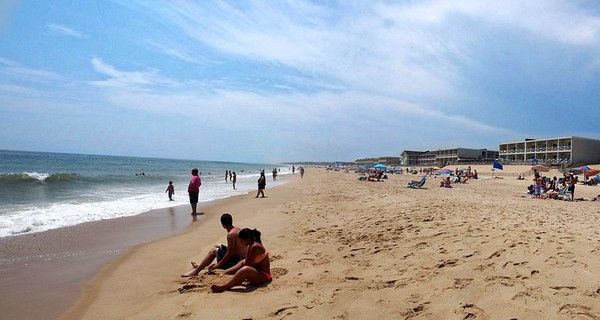 There are also some pretty towns worth visiting where you could go for a day, a night, or a weekend by train. These include New York towns Beacon, New Paltz, and Sleepy Hollow. In New Jersey, you can head to the 270-piece Grounds for Sculpture in Hamilton, NJ or visit picture-perfect Princeton, home to the famed university. For a short afternoon hop, take the PATH train to Hoboken to see Manhattan from a different angle.

Take a Train Trip From NYC to Boston

Getting from NYC to Boston on the Amtrak Acela Express train will take you about the same amount of time as driving: a shade less than four hours. It’s $69 to $189 most of the time, but if you’re willing to go on the slower regular train the fare can be as low as $29—less than the gas and tolls for drivers. There are also several bus companies (like Peter Pan, OurBus, Bolt Bus, and FlixBus) that do the trip from Midtown from $12 to $45 and get there in five hours or less.

Boston plays a big part in the history of the United States and has more of what we would consider historic architecture than most American cities. It has its own city train system, bike lanes, and good areas for walking to explore it all. It’s also the home of Harvard University and a long list of other colleges, so there’s a vibrant, lively culture.

See More of America’s History in Philadelphia and Washington, D.C.

Philadelphia is home of the Liberty Bell, Ben Franklin’s home, where the Declaration of Independence was signed. It is only about an hour and a half by train from New York City’s Penn Station, so it’s an easy side trip or a stop on the way south. The city has enough murals for 100 Instagrammers to pose in front of without getting in each others’ way and a culinary scene that gets better each year. Lodging prices are typically half or less what you’ll find in the city you just left.

Washington D.C. has as many iconic locations as NYC when it comes to buildings and monuments you’ve seen in countless movies and TV shows. It’s a great city for strolling, with the National Mall, interesting neighborhoods, and Rock Creek Park all in a fairly compact area. A metro system can get you around as well. The fast train gets there in around three hours if all goes well, while the price for a four-hour bus trip starts as low as $12. If you take the train, as I did a few years ago, this photo on the right is where you exit from Union Station. Not too shabby.

There’s one aspect of Washington, D.C. that makes it a great choice for travelers on a budget: The Smithsonian is free. It’s often called The Smithsonian Museum, but it’s really a collection of museums, many of them large enough to spend hours going through. There are good ones for kids, like the Air & Space Museum, several for art lovers, and important history museums like the recent opening of is the National Museum of African American History and Culture. It’s hard to emphasize how extensive these collections are: you can’t “do the Smithsonian” in a day and see more than a tiny fraction of it.

New York is a huge state, so when you hear “Upstate New York,” it’s not just a short hop from the big city. You can get to the main cities along the Erie Canal in five or six hours by train though, stopping off in Syracuse, Rochester, or Buffalo along the famous waterway. From any of them, you can rent a bike and ride beside the canal or take a barge trip like you would on some of the canals of Europe. Book a tour of the Finger Lakes to drink farm-to-glass wine, cider, craft beer, and spirits.

It’s possible to keep going all the way to the great Niagara Falls, reaching them in around nine hours from Manhattan. Once there, it’s easy to explore the falls by foot and boat without a car, from the U.S. side or the Canadian side (assuming the border is open).

Overnight Trips From NYC to Cities Further Away

You could take a train from New York one day in a sleeper and wake up in Florida the next day. Florida is surprisingly well-covered once you get there, with Amtrak and/or Tri-rail stations in Tampa, Orlando, Palm Beach, Fort Lauderdale, downtown Miami, and the Miami Airport. You could break up a trip there with a stop in one of the USA’s oldest cities, Savannah, Georgia.

If you want to keep the urban vibe going, you can take the train between New York City and Chicago. Settle in for a long haul though: it takes close to 24 hours. Prices start at $90. From there you could go on to Kansas City, Albuquerque, Flagstaff… 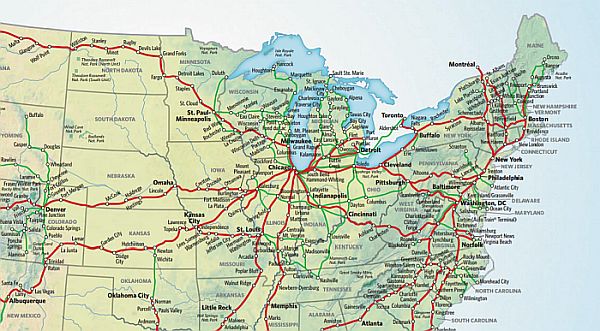 Yes, you can keep going and cross the whole country on Amtrak, but don’t expect it to be a life-changing experience that wows you the whole way like some of the other grand train trips in the world. It also won’t save you any money compared to flights from New York to California or Seattle. People usually choose this option because they love trains.

You have a wide variety of bus options from New York City that may not be as romantic-sounding as the train, but they’ll get you from place to place for a good price. Buses open up options off the train line like ski resort areas and secondary cities. Even the cheapest buses usually have reclining seats and Wi-Fi.

For any route you may be considering for bus or train trips from NYC, the best source is usually Rome2Rio.com. I’ve used it to plan my travels in multiple countries and it’s great to see all the options in one place.