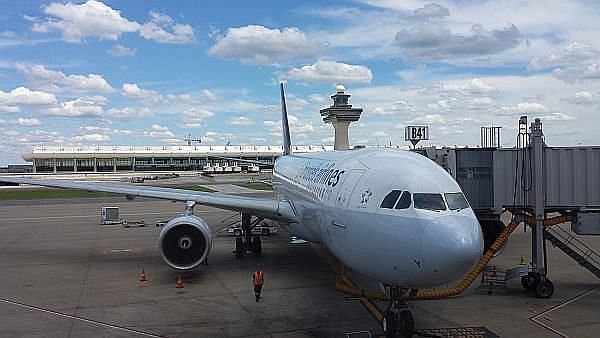 I’ve done a lot of flying the past few weeks and as the odds would have it, experienced several flight delays. Some were a half hour or an hour, which is no big deal if you don’t have a connection, a huge deal if you do.

When there are flight delays because of weather, this quickly compounds into a big mess as the delays stack up and the airlines try to re-book passengers on other flights. When it happened to me with Air Canada flights going through Montreal, the wait time on their phone line was “a minimum of one hour and 20 minutes.” The line at their customer service desk was 50 deep and nobody was answering any tweets.

In all fairness to them though, they were proactive about it. When I got off my incoming flight from the USA, they handed me (and many others) a boarding pass with a new flight to my next destination. Smart. The only bummer was they didn’t tell me there was a food voucher in there. I could have had dinner on them but didn’t see it until after I landed!

Since the Europeans tend to be more progressive about everything from privacy to human rights, it makes sense that they have a more formalized compensation plan in place too when it comes to flight delays. If you get delayed on a flight to, from, or in Europe and it’s the airline’s fault–think Lufthansa or Air France worker strikes or a mechanical delay–then you’re entitled to real cash compensation. See the EU regulations on delayed flights.

You only get compensation if it’s not a factor beyond the airline’s control though, so keep that in mind. If weather causes the delay or cancellation, you’re probably on your own. That’s why it makes sense to have at least one credit card that gets you hotel points to have in a bank, ready for a situation like this. If the delay is mechanical, a labor dispute, or a pilot stuck in traffic though, you may have compensation coming.

If the thought trying to deal with understaffed Ryanair and filling out lots of forms to get your money sounds like a nightmare, however, someone will be glad to take that burden off your hands for a fee. A company like Flightright can get you flight delay compensation for your hold-up, taking part of the settlement as a commission. They have been at it since 2010 and have good reviews on Trustpilot.

With a company like this, they are basically taking your case on contingency. You don’t pay out unless they collect. Then you still get 70-80% of the payout after their commission. Hey, how much is your time worth? I’d gladly give up that portion of the settlement to have $450 in my bank account in compensation. Yes, it could be that much for a lengthy delay.

One caveat with all this: the rules are murky now for the UK since they’re leaving the European Union. One of a thousand questions the bureaucrats haven’t really answered. Their airlines will probably stick to the rules, but they could bail out at any time.

What About North America Flight Delays?

The rules above do apply to flights from the USA to Europe or in the other direction. If your flight doesn’t involve Europe though, welcome to the world of raw capitalism.

Airlines employ a lot of lobbyists in the USA and it seems most of the time their contributions—er, I mean arguments—seem to find plenty of sympathetic ears in congress. It’s not much better in Canada or Mexico. It’s basically up to the airlines whether they’ll compensate you, which means the best they’ll do is get you a hotel for the night (if you are stuck and it’s their fault) or give you a meal voucher. No, they won’t let you into their lounge to kill an extra four hours either.

Many passengers are surprised to learn that there’s no law regulating this. Despite demands and outcry by consumer groups, the Department of Transportation has left it up to the kind spirit of our airlines to compensate us when they leave us stranded. So you might as well be nice to better your chances, not be a jerk. It’s not the clerk at the counter’s fault you’re going to miss your connection or even miss a wedding.

So you’re prepared in the event of a delay or outright compensation, you can see the general DOT rules here. Each airline has its own contract with passengers though, so you’ll have to check that on your airline’s site to know more.

Ways to Lessen the Risk of Flight Delays

There are a few things in your control to mitigate the factors you don’t control. These will make you less fragile and

improve your chances of avoiding stress.

1) Take the earliest flight. I had to get up at 3:40 two days ago to catch an early flight to Mexico. That sucked bad, but the plane and crew were there waiting for us. There’s very little chance of delay when you’re on the first flight out.

2) Don’t book a tight connection. Yeah, I know, you look at an hour in between flights and think, “Hey, that’s plenty of time to get one gate over.” Except when your first flight’s arrival is late and it’s not.

3) Don’t fly through notoriously backed-up cities. If you’ve ever gotten delayed in the New York City area, you know how quickly things turn ugly. Three airports are just a few miles apart and they’re all super-busy. Chicago and Boston suck in winter. Ft. Lauderdale and Orlando have lots of delays and cancellations despite their mostly sunny days. Search “airports with most delays” to get the current stats, but in winter try to avoid hubs with terrible weather, for a start.

4) Get travel insurance. I’ve talked about this many times before, but travel insurance is an additional stress remover. The airlines don’t owe you much, even if you spent $1,000 on their ticket, but if you get delayed for four hours, your travel insurance policy probably does owe you. You might even be able to cash in from your phone while you sit there at the airport restaurant.

Have you successfully been compensated for a flight delay or compensation? How did it go?

A few years ago, Alaska Airlines had a flight delay of a couple of hours. They gave me a voucher for a round trip ticket to be used within one year. Also, although not a flight delay, Alaska Airlines has a pledge that you will get your luggage within 30 minutes from landing at your destination. One time it took them longer than 30 minutes so they gave me 3500 airlines miles.

That's great to hear! Only flew them once, but it was a good experience.