I’ve been reading lots of articles on the cheapest places to travel in 2019 or the cheapest destinations. Most of them are crap. They’re poorly researched and written by people who don’t really travel much, sitting behind a desk in NYC or London. The idea is usually to focus on what sounds trendy (or who bought advertising that month) instead of what’s actually the best travel value.

Since I’ve got four editions of The World’s Cheapest Destinations under my belt and the 5th edition is in final edits right now, I might know a bit more about this subject than most. The changes usually aren’t very drastic from year to year or even over a period of three years. When I update the book, some sections don’t need more than a few minor tweaks. The strong U.S. dollar has made the best values an even better deal the past few years, however, and made some formerly borderline places more affordable to travel than they used to be.

A lot of this depends on your budget though. A person on a $40-a-day backpacker budget for a year is going to define “cheap” a lot differently than someone spending $400 a day for a week while on their one vacation of the year. So I’m dividing this into two sections: long-term travelers from the USA and American vacationers. The former group has more time than money. The latter more money than time.

The Cheapest Places to Travel for Long-term Travelers

When I published the first edition of The World’s Cheapest Destinations in late 2002, the cheapest countries in the world with decent infrastructure were India, Nepal, and Indonesia. Some 17 years later, those are still a safe bet overall, with some of the lowest per-day travel costs in the world. Within two of those countries though, there’s been more divergence. Bali has gotten too popular for its own good and is now a full-blown tourist trap, with prices to match if you’re not putting down roots for a while.

Southeast Asia is still reliably cheap in most locations. It’s not that way across the board, however. Some spots in Thailand are best suited to those with a tourist budget and parts of Malaysia and Laos can seem more expensive than they should be. With infrastructure still lagging and lots of political problems, Myanmar is not really a good deal.

Prices in Vietnam and Cambodia are consistently good though. No matter what kind of budget you’re on, you’ll probably be very happy with your hotels–and your massage prices. Thanks to how the exchange rate has fared since five years ago, Vietnam was one of the countries where I barely had to edit the prices in the new edition of my book.

As with Bali for Indonesia, some parts of India (especially Mumbai, Bangalore, Jaipur, Agra, and Delhi) have gotten quite a bit more expensive thanks to rising incomes at the top and increased tourism over the years. For India most of this is reflected in lodging though: it’s still quite reasonable to eat and get around and there are more budget flight options each year. The rate seems to have settled into a band between 64 and 74 to the dollar and it’s around 69 as I write this.

Nepal has been one of the cheapest places to travel since I started hitting the road in 1993 and they’ve been working hard to rebuild since the earthquakes a few years ago. I’ve been there twice since then and reported on travel prices in Nepal. If you go trekking through the mountains here and stay at tea houses, this may be the cheapest week or two of travel you’ve ever had in your life, but with some of the most spectacular views you could ask for.

Overall costs in the countries of Latin America are either flat or lower than they were in past years. Mexico is the greatest overall value now and it’s right on our doorstep. Its currency dropped by nearly 50% between 2015 and 2017 and it stayed there. When I first started visiting 15 years ago it was 11 pesos to the dollar. Now it’s usually around 19 or 20. It’s such a great deal that I moved there permanently. Mexico is still a better place for mid-range travelers than shoestring backpackers, but there are few places where you get as much for your money once you get out of the resort zones. Here’s how to travel Mexico on the cheap. 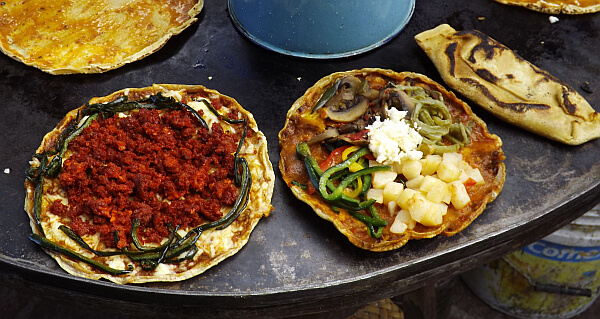 Sopes with chorizo or veggies for $1.25 each

Cheap travel spots with plenty to see and do include Guatemala, Honduras, Peru, Bolivia, and Ecuador. Nicaragua is a better deal than it’s ever been, but with a dicey political situation creating a mini Venezuela in the making, few people are visiting right now. The exchange rate in Colombia is still holding strong, making it a relatively good value. For now, Argentina is reasonably priced again.

In Europe, the rule of thumb used to just be “head to Eastern Europe.” That was a political designation more than a geographical one, applying to the former Iron Curtain countries. Those are still a great deal, especially outside the capital cities. So you’re still going to be a happy backpacker traveling in the Czech Republic, Romania, Hungary, and Bulgaria. Slovakia is a good value too, but harder to get around than the others and thus more costly on that count.

The countryside of Bulgaria

Portugal is also harder to visit on a backpacker budget, but it’s the clear winner as far as having the lowest prices in “western Europe.” It’s also got some of the best weather. What’s really new in the region though is the emergence of the Balkan countries as bargain travel destinations. I did lots of on-the-ground research the year before last and you can see prices for some at the links here. You can travel for cheap in the former war zones of Montenegro, Bosnia, Serbia, Kosovo, and Albania, plus Macedonia down toward Greece.

Morocco and Egypt are the two best travel values in Africa for any budget level and that’s not likely to change anytime soon.

The Temporary Bargains for U.S. Vacationers

If you’re on a vacation budget, you don’t have to worry much about what the situation will be like nine months from now. You want to know where the best summer travel deals are so you can get the most out of what you have to spend.

Mexico is still the most obvious choice this year for Americans, as it has been the past few years. Thanks to a variety of reasons that go from oil to Trump to bad governance, the Mexican peso has stayed quite weak compared to the dollar. You won’t see the benefit of this so much in a place like Los Cabos that caters to the wealthy, but you will see it bigtime in cheaper beaches like Puerto Escondido, inland cities like Mexico City and Guanajuato, and small towns like Real de Catorce and Cuetzalan. If you get into the interior of Mexico, you’ll find prices on restaurants, drinks, lodging, and entertainment that are half or less what you’d pay in middle America.

Our neighbor to the north is still cheaper than it used to be when we weren’t getting 1.3 loonies for every dollar. Canada is a good 1/3 less expensive than it was a few years back. It’s easy to get to, gorgeous, and mostly not very crowded—especially if you compare the visitation of their national parks to ours.

Colombia is dramatically cheaper than it was earlier this decade and the dollar is trading near a record high. Flights to the UNESCO World Heritage walled city of Cartagena are frequently cheaper than ones to the Caribbean. If you wanted to scout out eternal spring Medellin as a possible place to live someday, this would be a good year for a Colombia vacation.

Peru prices are lower than average thanks to an exchange rate drop, so if that’s on your bucket list start making plans. Just try to go somewhere besides Machu Picchu, will you? Brazil, Chile, and Argentina are all a better value overall than they’ve been in past years for mid-range travelers. Panama isn’t such a great destination for backpackers, but for those on vacation it’s a terrific value, especially when it’s time to go out drinking.

You can go anywhere except Singapore and find good values in Southeast Asia if you’re on a vacation budget. The U.S. dollar is up or flat against all the local currencies, which has a big impact in Thailand and it means you get 10% more for your dollar in the Philippines than you did three years ago. You get a third more for your money in Malaysia than you did five years ago.

Europe is still a relatively good deal this year thanks to a post-Brexit pound and multiple political factors on the continent. We’re in roughly the same spot we were three years ago. The normally outrageous prices in Scandinavia have actually scaled back a bit and Sweden is more reasonable now than it was three years ago when I was there. The best Europe value overall is Portugal in the western part though, while the former Eastern Bloc countries offer great values on food, wine, attractions, and hotels. To find the best values, try to get beyond the magnet cities of Prague and Budapest. Slovakia is a great option if you’re trying to find a gorgeous emerging destination without so many tourists. Hardly anyone seems to venture beyond Bratislava.

Not all that many people go on vacation to the Balkans except to relatively expensive Croatia, but if you do explore that area you’ll find prices too cheap to believe.

Wherever you do want to go, don’t put it off too long. I’ve seen the dollar rise and fall numerous times since becoming a travel writer 25 years ago and when you’re on the wrong side of the equation it can really sock it to your wallet. Just ask any traveling Canadians or Brits you know. Our turn to be blue will come and it’ll come without much warning.

It’s rare that a “cheapest places to travel” list has this many desirable destinations to include. When the exchange rate is so heavily in your favor as it is right now for Americans, it’s downright crazy to keep putting that big trip on the back burner.

See you on the road!

9 Popular Travel Destinations That Will Be on Sale in 2019

Your Input for the Next Edition