When I published this guest post on the price of travel in Prague three years ago, I had never been there. I skipped right over it and went to Moravia for a biking trip on my first Czech trip and never got to the capital. I just spent a few days there at the end of another trip to the Czech Republic last week though, so I’m updating this post on costs in Prague with some personal observations and new photos. The good news is, Prague prices haven’t really gotten worse. While the Czech city is more expensive than the rest of the country by 50-100%, it’s still a great value compared to many other European capitals. Most of this text is from Roman Jelik, a Czech-born resident who publishes the Travel Prague site and he has confirmed the accuracy of his numbers. 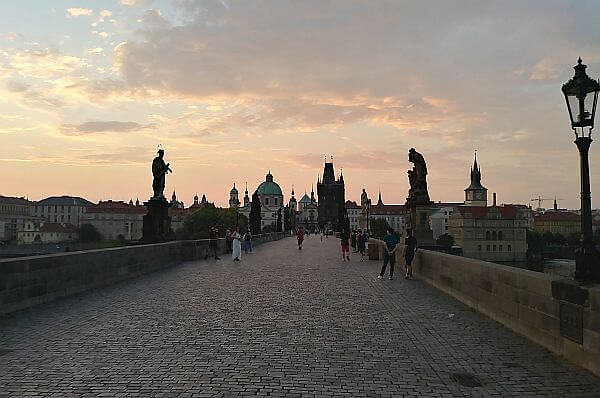 Prague is smack in the middle of Europe but can be a great bargain if you are careful about how and where you spend your money. The city of a million residents was host to nearly eight million visitors last year. Close to a million of those were Germans coming over the border for a holiday, but there were also nearly half a million Americans flying in for their vacation. Most came to be taken back to a time of castles, kings, cobbled streets, and medieval stone bridges. The city of a thousand spires does not disappoint. Standing at the base of the Gothic St. Vitus Cathedral and looking down at the patches of red rooftops and narrow streets one can easily imagine the city as it existed five hundred years ago.

The first thing you will notice is how cheap the beer is – and it’s really good beer. A half liter of the popular Pilsner Urquell costs an average 32 CZK at a non-tourist bar, which at current rates is about $1.50 USD. Or to put in another way, if after a few hours of chatting with your friends you find that you drank 7 mugs of beer you still have spent less than $10. The very affordable beer price probably has something to do with the fact that Czech people hold the infamous distinction of being the highest per capita beer drinkers in the world with 148 liters per person per year. (3 beers per day average if you count every resident: babies, the invalid, people who don’t drink…) They aren’t stuck in their ways though so you’ll find a wide variety of options beyond the original pilsner.

You would think that with all that beer drinking there would be a lot of beer-bellied people stumbling around. Yet there are plenty of skinny people. Even though a hardy plateful of goose, cabbage and dumplings glazed with grease is enjoyed once and a while, it is not uncommon to have nothing more than a bun with a couple slices of ham for lunch. All throughout Prague are delis with various hams, fish and potato salads. The salad is served on a little plate and costs around $2, the buns cost $0.15 each. There are little tables at which you can stand and eat your bun and salad. It’s quick, it’s simple, it’s delicious, it’s filling, and best of all you spent under $3. It’s common to see sandwiches for $2 or so, on good multigrain bread or fresh-baked buns.

You are not going to be able to find great deals if you plan to stay at a hotel in central Prague. The prices are similar to hotels in other major European cities. Expect to pay anywhere between $90 and $150 for a double room at a regular 3-star or 4-star hotel. (Check current prices from multiple sources here.) Of course as you move closer to the Charles Bridge or Old Town Square the prices rise proportionally. Prices dip down a bit as the temperature drops, then shoot up in the summer high season. (Tim here – I found a nice hotel with buffet breakfast for $99 a night including taxes in August, and got $20 worth of Bonwi reward points back for it, but near the Staropramen brewery a few kilometers from Old Town.) Hostel bed prices average around $19 a night for a dorm.

To save money, and experience what most tourists never do, you should consider staying at a pension just outside of Prague. Celakovice is a pleasant 25-minute train ride through the countryside. With 10,000 residents, the riverside village has all the amenities you need: a town square with church-bell tower, restaurants, bakeries, delis, butchers and even a supermarket. For $40 a night you can stay at a fully furnished apartment with kitchen, couch and bath located right on the main square.

The train to Prague departs twice an hour and costs $5 for a return ticket. Staying at a pension enables you to make your own meals and relax in the sleepy town when you need a break from the crowds of the big city.

Taxis have a terrible reputation in Prague. There was a time when if you stood at the airport with your bags and hailed a taxi you where no better off than a fresh carcass on the Savannah. Stories abound of oblivious tourists paying $200 for a 30 minute taxi ride to Prague. There was probably some truth to these stories as now there are set prices for taxi rides to the center of the city. No need to haggle or debate – just pay the amount stated on the signs in the airport. A taxi ride to the city costs approximately $30 depending on where exactly you need to go. You might argue this is still expensive just to get into the city, or you can look at it the other way and consider that you saved $170.

Update: Uber (but not Lyft) is available now in Prague as well, which I took from my hotel to the airport for about $17 in a nice “Select” car. There’s also a similar local service called Liftago which I used multiple times in another Czech city. It is basically a multi-taxi service with the standard rates, but one you can pull up on your phone without calling anyone and you can see how far away the driver is. No fear that you’re overpaying or that you’ll have to phone someone in Czech.

In terms of land area Prague is a tightly packed city and most of the interesting tourist sites are walking distance from each other. The popular Royal Walk through Old Town, over Charles Bridge, and up to Prague Castle starts from one side of the city and ends on the other; walking at a leisurely pace it can be done within a day. There are many other long walks that get you out of the packed central zone, with printed maps available at the tourism office. See more info here.

If you really need to get to the other side of Prague quickly and cheaply I would recommend the public transit over a taxi. For just over $1 you can get a one-way ticket or for under $2 you can purchase a 90 minute pass which enables you to use any combination of metro, tram, and bus to get to anywhere in Prague. A full-day pass is under $6.

If you are on a budget, this is a city where there is no great reason for you to spend any money on admission. The city is best experienced on your feet and from the street. The buildings and statues are the museum. The underground restaurants and the delicious cheap beer they serve is your entertainment. The Old Town square is free, the Charles Bridge is free, walking up to the castle and sitting on the royal lawn is free. (Note from Tim: when I walked by the castle entrance area, there were six busloads of tourists waiting in line to pay the admission and enter. Ugh.)

Prague can be a very cheap city to visit but it can also be very expensive. It depends where you pull out your wallet. Because there are so many tourists and almost all of them visit the same few sites, it is just good business sense for a shop or restaurant owner to raise their prices and collect as much as they can. To avoid overpaying follow the simple rule of never buying anything in a popular tourist spot or on streets connecting the sites. Here’s an app to tell you whether your are in Prague tourist trap. Simply walk 200 meters in a random direction till you are safe in local territory and buy your goods there.

Here are some more tips to check out: 8 Insider’s Tips on Traveling to Prague

This is a guest post by Roman, a travel writer living in Prague, who also shot the outskirts and taxi photos. He shares tips and advise on his website Prague Travel. He invites you all to come for a beer or two or three.

How Much Does It Really Cost to Live in Bulgaria?

Good Beer at Bargain Prices in the Czech Republic