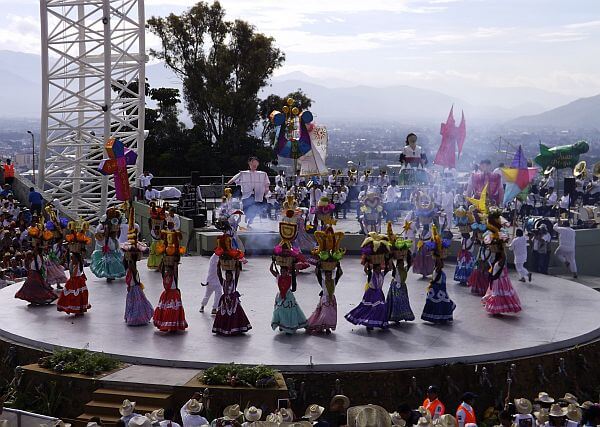 The city of Oaxaca in Mexico is a treasure known for terrific food, a gorgeous colonial center, and the best handicrafts selection. In a country like Mexico where all three are abundant, that’s really saying something. It’s the capital of a state that has 16 distinct indigenous groups, so all its attributes go into overdrive in late July each year, when the Guelaguetza Festival comes to town.

The Guelaguetza Festival started in its present form in 1932 as a humble attempt to spotlight in one place some of the dances already going on in the villages outside the capital city. The word roughly translates to “social offering” in the local Zapotec language and comes from the tradition of everyone bringing gifts to social occasions such as weddings or baptisms. It has grown into a major spectacle, with dance groups from specific towns around the state performing in their traditional outfits, backed up by a full-blown live band. 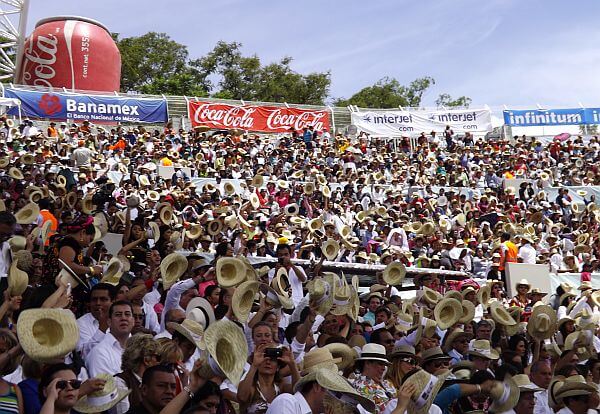 The dance performance itself takes place in a big outdoor theater on a hillside that seats 11,000 and it looks down on the center of the city. A festive party atmosphere pervades, with performers and helpers tossing items representative of that dance group’s region into the crowd from the stage. Even all the way up into the nosebleed seats, people are tossing woven reed baskets, packets of coffee, and sweets. 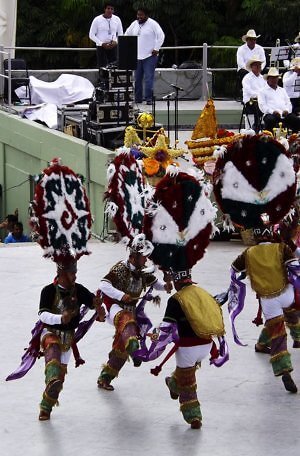 Each dance is quite different, from somber to celebratory to silly. Some are representations of wedding dances or courtship rituals. Others have participants doing elaborate moves with some unusual props: some of the men from San Tomas Mazaltepec dance with a turkey in hand and the women from San Juan Bautista Tuxtepec sway in and out with a pineapple on their shoulders. Many of the costumes are extravagant, whether it’s the giant headdresses of the dancers from San Jeronimo Tlacochahuaya or the painstakingly embroidered skirts of the women from Asuncion Ixtaltepec.

The finale is the colorful and upbeat dance from Santa Catarina Juquila, which climaxes with guys running around with spinning wheels on their heads that are mounted with fireworks. (Somehow the synthetic-clad dancers manage to avoid any burns.)

With 16 groups lined up to perform, you could be forgiven for thinking a performance like this is going to be a long affair to sit through. There’s so much variety in the music and costumes though that it never really lags. The items tossed into the audience liven up the proceedings between acts and there are soft drinks and water for sale for cooling down. Here’s a bit of what you can expect:

The Guelaguetza Side Show

The dance festival itself is just the centerpiece of the action, however, a reason to stage a citywide party. If you’re in the area at this time, there are events going on all over the capital and into the surrounding countryside as well. Get a schedule of events after arrival and choose between art exhibits, music shows, and food fairs.

A tamale fair is set up next to one of the city’s prettiest churches: Basilica de la Solidad. There they serve a wide range of banana-leaf-wrapped packets of deliciousness made by hand. Accompanying the food is a fruit drink or the unique tejate, a pre-Hispanic concoction made with corn flour, water, and cocoa. Once you get past the consistency and the women stirring it with their bare arms, it’s tasty.

A mezcal fair takes up half of Paseo Jaurez El Llano Park, the fountain dressed up with maguey fruits (what mezcal is made from). You can try samples from dozens of small producers at their booths and sip a cocktail while listening to live bands in a shaded performance tent. This can be a great leaning opportunity for getting to know an artisan spirit with a strong sense of place.

You’ll have trouble deciding which souvenirs you can afford to carry because during Guelaguetza weeks, the city sets up special booth areas where artisans from around the state can come sell their handicrafts direct to visitors. In the park next to the mezcal event are 50+ booths with vendors from specific villages, each place marked at the top of the booth. Multiple other areas are set up with black pottery, colorful carved wood alebrijes, and woven bedspreads.

All kinds of concerts and events are piggybacked onto this festival period and when I was there, Lila Downs performed to a packed audience at night in the same theater as the dance performance. You might find a semi-famous jazz musician holding court in a small club or a well-known painter opening a new exhibit in a gallery. Of course the city’s top chefs are in town to put their best face forward during this peak time for VIP visitors. It may be more crowded than usual, but for good reasons.

Oaxaca’s Guelaguetza Festival usually takes place the two Mondays after July 16th, the Day of Saint Carmen, with events going on before, during, and after those dates. See more information on their Facebook page in Spanish or at the Oaxaca Tourism site. Buy tickets in advance from Ticketmaster Mexico.

See more on the area in this post about excursions from the city or this Perceptive Travel story: Handmade in Oaxaca.

Yes, I have listened about Guelaguetza in Oaxaca but during my last tour to Mexico, I missed it because I visited there at the month of June. But I enjoyed a lot; I love the luxurious travel in the expensive vehicles of Oscar Cancun Shuttle.