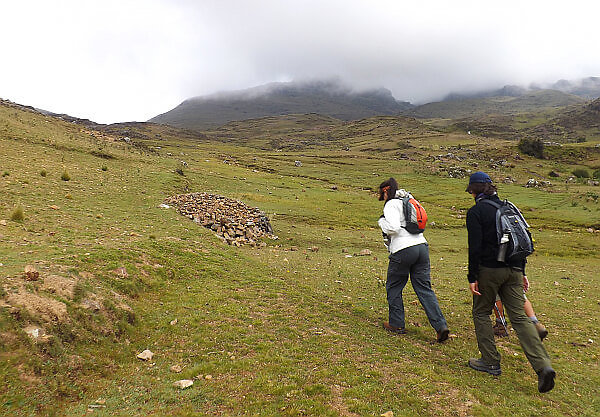 For decades, the used clothing that wealthy countries’ citizens cast off every week found ready buyers abroad. What Goodwill, Salvation Army, and the like couldn’t sell in their stores or give to the homeless, they would ship abroad by the ton for the items to sell in local markets. Some would become scraps, destined for new life as blankets or towels.

This system is starting to break down, however. In a story earlier this year in Bloomberg called “No One Wants Your Used Clothing Anymore,” the writer showed how “fast fashion” and cheaper Chinese manufacturing processes are upending a system where used clothing moved around the world and got used again or turned into other items, like blankets.

That article was criticized for just focusing on a small segment of the market, but others have been sounding the alarm for a while. This article in the BBC confirms that donations are up, but the market for the cast-offs is not.

In many ways it’s a virtuous cycle. But only 10% to 20% of donated clothes are actually sold through charity shops like Oxfam’s.

The rest are sold to distributors who then sort the clothes and send them on to countries like Pakistan or Malaysia where they are sold in second-hand clothes markets or recycled to make products like fleece.

There’s just one problem: those countries increasingly no longer want our used clothes.

While the used clothing market is still significant—it occupies a whole half of a public market where I have a house in Mexico—the declining prices of apparel and the faster new item cycles have created a negative side effect:  there’s a glut of used clothing available worldwide. As the Bloomberg article pointed out, Global clothing production has doubled since 2,000 and people are tossing items after fewer wears. Blame it on fast fashion, disposable outfits, or the fact most people have overstuffed closets, but the world would be better off now if we sent less to the Goodwill bin.

Buy Quality Travel Clothing That is Meant to Last

So here’s an idea: buy well-made clothing that will last and try to wear it out.

That’s long been the bold plea from Patagonia, but they are a rarity. Most companies want to sell you as much clothing as you are willing to buy and will mostly ignore the environmental impact. When Patagonia ran the ad below, it really got a lot of attention.

They got their point across because that campaign got a lot of press. And the message was simple: buy quality and use it for years. Don’t be a slave to fashion and trends. Don’t use the excuse, “I can’t afford good quality.” Because if you buy on sale cycles instead of fashion cycles, that alone can cut your buying costs in half.  As I write this there’s a huge clearance sale going on at REI. You can always find name brand items on sales at Backcountry or Moosejaw if you aren’t obsessed with getting what just came off the container ship this season.

How do you know you’re getting good quality? If the brand has been around 20 years, that’s a pretty good sign they keep their customers satisfied, but companies can change hands and go downhill, so that alone isn’t always enough.

Warranties are a good clue too. Not many clothing brands offer a lifetime warranty, but some do. I’ve raved about Tilley Hats before and you’ll also see a great guarantee from LL Bean, Eddie Bauer, Outdoor Research, Darn Tough Socks, Duluth Trading Company, and yes, Patagonia. Some of the limited warranties cover any defect and that includes Marmot, Mountain Hardwear, Smith Optics, North Face, and Gore-tex. (The actual product of Gore-tex is in items from other manufacturers, but they’ll do the replacing if you get wet wearing something with Gore on the label.)

Still wearing all three of these items, four years later…

Personally, I’ve been amazed at the durability of ExOfficio clothing. There are items I’ve worn 50+ times and they still look as good as they did when I put them on the first time. They often run good sales too on their own website so unsold inventory actually gets sold.

Many of the go-to items I throw in my bag when I go on a trip are the same ones I threw in four or five years ago, sometimes longer. They are items from Sierra Designs, Craghoppers, Ecco, Oboz, Lowa, and some of those lifetime warranty brands listed above. And hey, the post about Colombia Sportswear gear that has done me right includes a photo of a jacket I use that is made from recycled plastic bottles. Double good karma.

So do your part. Try to wear out a few pairs of travel pants and jackets before you toss them and go on a buying spree. If you buy quality travel clothing, you might find that it’s harder than you think to wear these things out. You might learn that they’ll survive whatever you throw at them over years of hard adventures.

You may be joining a new trend if you do this instead of more shopping. As a Bloomberg article that came out five months after the first one I referenced above said, “In the near term, the bigger challenge for apparel makers, wherever they are, is that people in developed countries, particularly the U.S., seem to be losing interest in buying new clothes.”

That’s a good sign. Maybe our consumer-obsessed culture is getting wiser. Buying four pieces of well-made, quality travel clothing that lasts for years is better than buying 20 items that you’ll soon be tossing out.

I picked this photo below for the Pinterest shot because it’s from a trip to Peru five years ago. The only thing I’m wearing there that I’ve tossed is the baseball hat. Buy quality travel clothing and it will serve you well for a very long time. 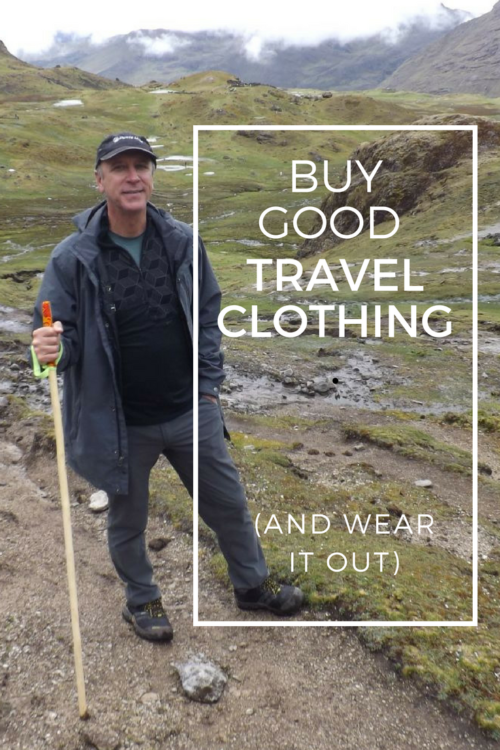 Definitely agree with your brand choices. ExOfficio and Columbia are my favorites (I have a Columbia 3 season jacket which I bought in 1992 in Seoul that still is functional). Between those two brands I have almost 4 dozen travel shirts. I would have gone for Patagonia jackets but I find their classic designs too simple (compared to an ExOfficio or Baubax). Also anything with a big percentage of Merino wool is a worthy investment, despite it being 4-5x more expensive than an ordinary cotton shirt.

Exactly. Fast fashion has got to stop. Quality over quantity any day.