If you never seem to have enough money for travel but a billion other people on the planet do, what’s wrong with this picture?

It probably means that something else is a bigger priority.

When I got back from my first trip around the world, after spending 12 months circling the globe, the questions from friends and family were amazingly predictable.

1) “What was your favorite place?”

2) “How could you afford to travel for so long?”

After two more times around the globe and many more shorter jaunts, I gave up on trying to explain why the first one is hard to answer and came up with a pat answer. But the second is still annoying more than 20 years after that first trip around the world.

Getting through life involves a series of decisions: what to study, what to do for a living, who to spend your life with, where to make your home, what to strive for.

If you want to cut the conversation short at a party where we’ve met, just sigh and say “I wish I could travel more” as you look down at your $200 shoes or twirl the keys to your BMW.

How you spend the money you make and how you live your life are also decisions that are in your hands. You can spend $699 a month on a car payment and not have anything left to travel with, or you can spend less than half that on a car payment and have over $4,000 a year to travel with. Or you can pay off your old car and keep driving it (or live in a city with good public transportation) and have even more to spend on real living.

If you spend $500 a month eating out in restaurants, or $300 a month on weekly massages, that’s your business. But if you do and then whine about not being able to go on vacation, that’s a priority decision, not a lack of funds.

After you get past mandatory things like health care and the water bill, spending is a matter of priorities. Those who travel make travel a priority. Those who are more concerned about filling up their shelves and attic with more stuff don’t get around so much.

In the “first world,” we’ve got more stuff than we know what to do with. My grandparents had one radio in their house for most of their life. My family has 3 laptops, 3 smart phones, and three other devices that can play music. My grandfather and grandmother on my mother’s side raised five kids in a house that was smaller than what the average middle class family of three lives in now.

Apparently my current residence is below average–“only” three bedrooms. In 1950 only 1 percent of homes had four or more bedrooms. Now the majority of new homes built have that and the number is rising. In 2014, 9% of new homes built were more than 4,000 square feet and another 22% were 3,000 to 4,000. The median size is close to 2,500 square feet now and every week on HGTV you see people on camera going, “Well it’s kinda small…”

Then people fill up those houses with more stuff. And more stuff, and then all the stuff they gave each other for Christmas. Soon their garage is half filled with things they’ll never use again.

Buying Experiences Instead of Things

One of the great things about getting out into the world and seeing how everyone else lives is that it gives you perspective. Unless you’re completely clueless, you see that most of the world gets by on far less than we consider a bare minimum. Many of them are happier even. Can you believe it? Many are also healthier, sleeping better with less stress because they haven’t purchased so much pampering, comfort, and junk food. 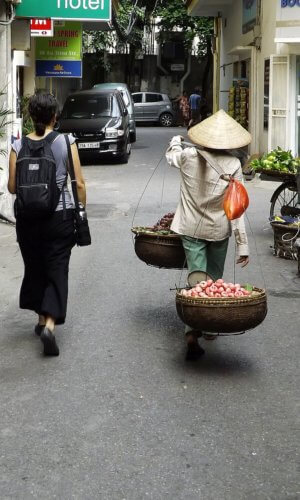 If you think you can’t afford to travel, take stock of what you have and where your money is going. This past weekend I met a teacher who had just retired. He’s thinking about becoming a travel blogger because he has already been to 27 countries on four continents at age 60.”I got every summer off and a long Christmas break,” he said, “so I took advantage of it.”

There was no mention of being short on funds because he was a teacher. Only the upside of having so much time. He could have spent what was left after paying the bills on something else, but he wanted to travel and made it happen.

I’ve met construction workers, waitresses, bartenders, janitors, burger flippers, and freelance writers making their way across the globe. Unless you are poverty stricken or homeless, a few budget tweaks could get you there. Heck, you can take a bus to Mexico for starters and drop your expenses by half.

If you want to travel more, you can. It’s just a matter of deciding what’s really important. Here are some concrete ideas to get you started:

“I wish I could travel more” is a lame thing to say.

This is great advice. Money that can buy memories for travelling is well spent!

I completely agree with you Tim. It is always an issue of priority. Some people just love their comfort zone (such a pity) and some prefer to discover the world. I hope that travel bug will get everyone, once you get it you can't turn back to your ordinary life and 9-5 work.

I luckily get that one and save money during the year and do at least two big travels. I've of course faced with difficulties and could have saved money also during my travels. It always made me so annoyed spending money on taxis just because I did not know how the transportation system works. That's why I just created a website for travelers so that they can check easily all the possible airport to center transportation options so that they can save money, time and energy. Here it is if you guys also wanna take a look and bookmark, we are currently expanding the database: http://airporttocenter.com/

Good tips for saving money. i see your write some helpful article. I hope its great from you. I'm inspired by you. Thanks

Best way to spend money thank you. I am trying to follow you .

I think fiber optics have arrived. I'm pushing on to San Cristobal de las Casas in June(I think), however in the event that you wouldn't fret hot climate you could do far more regrettable than Valladolid.