As we sat and listened to the couple talking about where they had been on their round-the-world trip prior to this small island in Indonesia, I was getting exhausted. It was not because I had been especially active that day, but because their itinerary was so frantic and detailed that it made me tired just hearing about it. They had seemingly spent at least half their waking hours in transit: on planes, in buses, on trains. They rarely unpacked and were constantly on the move. The next place on the spreadsheet was calling. The plane tickets to the next country were booked. And the one after that.

Even for the most hopeless type-A personality, this is a rough way to travel. Just because you can now plan out and book an entire year of travel doesn’t mean anyone should. Here’s why.

I already went over this in detail in The Budgetary Case for Slow Travel. Go read that post if you don’t already know that fast travel means fast budget depletion.

The people you see getting the most upset when their flight or train gets delayed are the people who have the most fragile schedules. In business this can make sense: you need to make your presentation and you have to get back to the office for meetings. If you’re traveling for pleasure though, an attitude of flexibility and calm should be a natural result of your (lack of) plans. If you don’t have a job to get to or an appointment where someone’s waiting for you, chill out and roll with it.

If you’re going to buy your ticket from Thailand to Vietnam when you’re ready to move on from Thailand to Vietnam, then you’ve got nothing to worry about if a typhoon rolls through, an airline goes out of business, or a coup breaks out. If you bought a plane ticket six months ago for that route on a specific date, you’re in trouble.

3) Your favorite websites at home probably won’t cut it where you’re going.

Seasoned travelers know that while the likes of Expedia and Priceline may be kings in the USA, there are much more thorough options in other parts of the world. If you’re searching for a hotel on Bohol Island or El Nido, Palawan, for instance, you’re better off using a local booking company like Traveloka instead. You’ll usually have a bigger selection and you can search prices in the local currency (and your own). 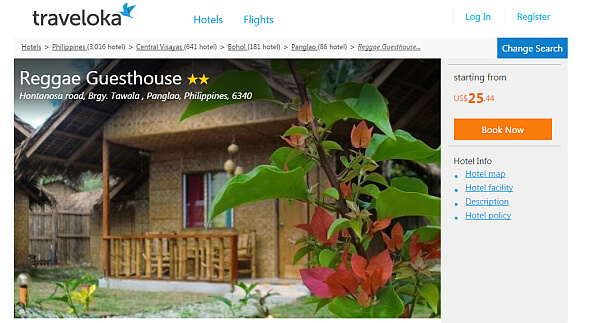 When it comes to flights, it’s even worse. Your favorite search app or website could cost you a fortune when you’re in another country. There will be airlines you’ve never heard of and flight search tools you’ve never seen.

Also, don’t forget that storefront travel agents are still a thing in many countries. A few years back we shaved $100 each on three one-way flights for my family just by stopping into a local agent’s office in Siem Reap, Cambodia.

The flight price you pull up now for six months from now will likely change a hundred times before you actually get on that plane. There are times when it pays to plan ahead, especially for

some budget plane, train, and bus options in Europe, but in general you won’t lose a lot by waiting. Every week there are going to be new sales, new routes, even new airlines. The situation on the ground can change due to terrorism or disease and all of a sudden every option is marked down. Locking in tickets far ahead of time is seldom a good idea.

5) Your original plans may suck.

Let’s say you looked at a bunch of “Incredible India” photos and decided this was the most beautiful place on the planet. You’re going to spend three months touring around the country. You plan flights, book hotels, book train tickets, get everything done you can in advance. Then you get there and…you hate it. The touts, beggars, and scammers drive you crazy every day and the pollution in the cities brings on daily asthma attacks. You’ve got a case of the runs you can’t seem to shake.

If you’re committed, you have to grind it out for 2.5 more months or pay cancellation fees. If you haven’t booked anything ahead of time though, no problem. You hop a flight to somewhere else and move on.

On the other hand, you may have planned to spend two weeks in India but when you got there you felt energized and renewed. So you hole up in Rishakesh for six months at a yoga ashram and feel total bliss. If you’ve got no other bookings done, why not? You can cut out or shorten other destinations you had penciled in for later.

6) Other travelers give you reasons to change plans.

You’re going to meet a lot of other travelers when you go bopping around the world. You may even run into the same person or couple in three different countries. Or you find you’re on the same route as someone else and end up traveling together. The people you meet are going to give you all kinds of great recommendations on where to go, where to stay, and places to avoid.

If you’re flexible, you can take advantage of these and some may end up being the highlight of your trip. (This is, by the way, a reason to get your face off Facebook every night and go talk to real humans instead, but that’s another story.)

7) Your stress levels are proportionate to your travel frequency.

Let’s face it, flying is seldom fun anymore. Being in an overcrowded bus or train for eight hours, with no air conditioning when it’s sweltering hot, is even worse. Why go through this every couple days just to tick off another box?

You will enjoy your trip around the world a lot more if you don’t try to cover the whole world. You can’t travel without moving from A to B, of course, but you don’t have to turn your whole trip into a series of views out the window.

8) This will not be your only trip.

If you skip a destination, it doesn’t mean you’ve skipped it for life. When my now-wife and I circled the globe three times in our pre-child days, we didn’t go anywhere in the Americas. “It’ll still be there later,” we said, knowing it would be easier to get to those places as our life progressed than it would be to fly across the Pacific Ocean. Since then I’ve been to Peru five times, Ecuador three times, and we’ve lived in Mexico for three years. As a family we’ve vacationed in Canada, Costa Rica, Guatemala, and all over Mexico. You will go traveling again. You don’t have to see the things “to see before you die” in one year unless you only have one year to live.

How to Keep Your Round-the-world Travel Budget in Check

9 Exotic Cocktails to Make for a Taste of Travel