Want to make Thai food in your kitchen that tastes like what you get in a restaurant? There are two basic rules to make it happen: get the right ingredients and add them in the right order.

This week I took my second one-day Thai cooking course and was reminded that one of the world’s most interesting cuisines is not some super-complicated endeavor to prepare. Thai dishes are all about freshness, so you’re not slaving over a hot stove for hours and combining a couple dozen things like you would with, say, mole sauce from Mexico.

The first time I did one of these was a few years ago with my family, when we cooked on an open-air balcony and ate while sitting on the floor inside. That was with Silom Thai Cooking School, which is in an easy-to-reach location near a BTS skytrain station.

This time I wanted to try something less casual and ended up where the chefs train at M.S.C. Thai Culinary School. Those who want to work in Thai restaurants study here non-stop for a year, in a large professional kitchen that looks like something out of a Food Network show. I was only hitting the burners for a few hours, but I certainly couldn’t blame any problems on the equipment.

The approach here was not to make an entire menu in one shot, but to prepare two common restaurant dishes in different forms. By varying the approach a little we could alter the taste substantially while still keeping its essence.

My instructor Surasak used to be at chef at the Dusit Thani Hotel in Bangkok, working many years before he got tired of the grind and the limited time off. At this place he has sous chefs that get all the ingredients ready ahead of time, so we literally had them served up on a platter for us.

We started with Pla Sam Rod, which is deep-fried fish with sweet and sour chili sauce. We made three versions of the sauce: one with pickled garlic, one without, and one with an additional kind of chili peppers to give it more kick. I liked the last one the best, but any of them would have made me happy on a restaurant plate. The key ingredients? Besides that pickled garlic from a jar, the other things you would need to track down in an Asian market probably were coriander roots, tamarind juice, fish sauce, and some kind of Thai chilies (we used “red spur” ones). You can use a mortar and pestle to combine ingredients or a blender. Then the sauce is cooked quickly in a wok—only a few minutes.

Next we made the well-known Tom Yam Koong soup, a staple on every Thai restaurant menu. (“This is the most popular soup in Thailand,” Surasak told me. “Next is probably coconut chicken soup.”) We had to do some prawn dissection on this one and if you’re the type that doesn’t like to know the details of what you’re eating if it’s gross, you may want to stop reading here.

Basically most of the prawn gets used, but at different phases. All the gunk that’s in the head is a key ingredient in the last stage of the preparation and has the charming name of “head fat.” The shells get used in the first phase, which is making a stock. We did one version without these steps, just using water instead of stock, and it was quite boring, tasting like someone forgot a step. Which we kind of did. If you’re going to make shrimp soup, you need the whole shebang apparently. 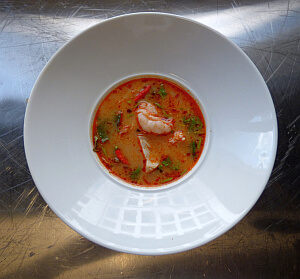 The third version though was my favorite and that was the normal version plus an addition of fried chili paste combined with condensed milk. It naturally made the soup much creamier and the chili paste gave it a whole additional layer of flavors.

1) You need the right core ingredients.
There are items that you simply cannot skip or it will throw the whole thing off. Many of them make a dish “taste Thai” or “smell Thai.” These are items such as lemongrass, coriander root, cilantro, galangal, fish sauce, kaffir lime leaves, and Thai “bird’s eye” peppers. If these are in your recipe, substitute with great care.

2) Thai food is cooked quickly.
You will not start prepping two hours before dinner if you’re cooking up this country’s cuisine. Once things are chopped, it can be as little as five minutes between starting and plating.

3) But it needs to be done in the right order.
There are five steps in making Tom Yam Koong and if you get them out of order it’s not going to taste right. In general this is because the most fragrant items or those that can overcook the easiest go in last, right before turning off the burner. Follow the recipe!

4) No salt.
“When a foreigner complains that the Thai food they make doesn’t taste right,” my instructor said, “I usually find out they put in salt. ‘Why did you put in salt?’ I ask them. ‘Because I always put in salt when I’m cooking,’ they say. No no no. Never do that with Thai food. You don’t need it with all that flavor and it ruins the taste.”

Sugar is a different story: it’s the sweet in “sweet and sour.”

Follow this link to book your own cooking course at M.S.C. culinary institute, where prices range from 1,500 to 4,000 baht. There’s also a fruit and vegetable carving class if you want to learn how to make those cute garnishes. I paid for my cooking class at Silom, but the MSC one was covered as part of the TBEX Asia conference, sponsored by Thailand Tourism.