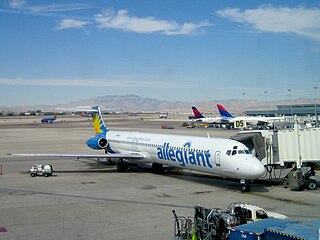 One travel perk of moving to Tampa for a couple years has been a big improvement in flight options. Besides having lots of airports within a 4-hour drive if needed, one 30 minutes away is a hub for Allegiant Air.

Never heard of them? I hadn’t either before moving here, but it’s a godsend for people living in small and mid-sized cities in the U.S. who want to get someplace warm and sunny in a hurry. If flies direct from St. Peterburg/Clearwater airport (with the yummy abbreviation of PIE) to all kinds of places with normally crappy air connections. Places like Lexington, KY; Roanoke, VA, Chattanooga, TN; Appleton, WI; Duluth, MN, Greenboro, NC. They also send lots of flights to Myrtle Beach, Ft. Lauderdale, and Orlando, plus you can get from Florida all the way up to Niagara Falls direct, which would be an easy way to get to Canada too. They have other hubs in Orlando, Ft. Lauderdale, Ft. Meyers, and five cities out west. See the full route map here.

Their fares are routinely lower than anyone else’s by a wide margin, so besides the time factor, the price is enticing too. Just one problem though: you’ll pay for everything after that. Like Spirit and RyanAir, Allegiant looks at the airfare as a base. It’s the starting point from which they pile extra fees on top of to make the real money. So you’ll pay for anything to drink, a seat assignment, using your credit card, and even a carry-0n if you bring a bag.

Is there any way to avoid all this? Well you can avoid eating/drinking in flight and take your chances on a seat upon arrival—probably ending up in the middle. You can use a debit card instead of a credit card. And you can pack lightly. Really lightly.

I’ve now done four flights on Allegiant without paying a bag fee. It wasn’t easy and when I head to a wedding in October where I have to dress up, I’ll pay up to bring a real suitcase. These two trips were just for a long weekend to hang out with my father though, leaving on a Friday, returning on a Monday. The photo here shows the back I packed and my secret weapon—a Scottevest.

Allegiant and Spirit Air both say to avoid baggage fees, your “personal item” must fit under the seat in front of you. Apparently Allegiant Air’s seats are smaller than Spirit’s because while the latter allows dimensions of 16 by 14 X 12 inches, Allegiant limits you to 16 X 15 X 7 inches. That’s a tad larger than the size of a laptop bag for those with a 15-inch screen or less.

Obviously there’s more height than 7 inches under the seat, but their rules are rules and they enforce them with vigor. Gate agents were slapping $35 fines, errr, baggage fees, on anyone who dared to carry two items of any size or had a bag larger than these dimensions. (Talk about a horrible job to get up for every day!)

Despite all the luggage  and bags I’ve reviewed at Practical Travel Gear, I had to resort to a trade show schwag bag to find something of this size. It held my laptop, laptop cord, and the following: one pair of Sanuk Rasta Pouch shoes, one extra pair of pants, a pair of shorts, two collared shirts, two t-shirts, three pairs of socks and underwear, and a small toiletry kit. In the outside pocket I had an inflatable travel pillow I ended up not using.

In my Scottevest went everything else not in my pants pockets: phone, iPod, earbuds, keys, portable charger, loose change, sunglasses, ticket, boarding pass, lip balm, etc. It could have held a lot more (like underwear or some toiletries) if I really wanted to push it.

Would I go through all this for a longer trip? No, even for a cheapskate like me who’s got plenty of lightweight travel clothing, it would be hard for a real vacation. But since my option was to pay $64 in fees or have $64 to spend with my dad over the weekend, it was worth it.

See this newer Allegiant post for a more recent rundown.

Another way to save with Allegiant Air is to buy your ticket at the airport counter. When a family is travelling, the savings can add up quickly, as the convenience fee to buy online is per segment.

I was searching for the type of bag that would fit the dimensions that Allegient imposes, but so far after searching many many sites, I have not found it. Please share the name brand of the bag you finally found. If you have a link, that would be helpful. I will certainly take a look at the Scottvest for sure.

I'm not Tim, but I'll add that I've also looked long and hard for a bag that would fit these dimensions and the closest I found was the Roxy Carry All Bag (http://www.ebags.com/product/roxy/carry-all/266354?productid=10280154) but it seems to no longer be carried by eBags. Even so, at 16" x 13.5" x 5.5", it still isn't the maximum size that Allegiant allows for free and, let's face it, at that size, every inch counts. So I made my own. If you aren't crafty yourself, see if you can find a friend that sews and can whip you one up. Good luck!

You only pay for a seat if you want to pre-select it. I have never paid the preselect seat fee.

I'm also curious to know how much the airfare cost (or at least the average price of a roundtrip). I've heard of the Scottevest and it sounds like a simple solution--hope the airlines don't start charging a fee for that too! Great info about this under the radar (no pun intended) airline!

Nicely done. So how much was the airfare? I'd imagine that $64 has to be a pretty big percentage of what you paid for the ticket, right?

My RT flight from Tampa Bay to Greenville/Spartanburg SC was $158 all-in, including paying to get an assigned seat. I'm about to book one to Roanoke, VA for a wedding and will pay to check a bag for that, but it'll still be under $200 with all the gotcha fees. Compared to $360 or so on crappy USAir with a connection in Charlotte. Times 3 for a family and that's a huge difference, not even counting USAir's charge to check anything.

And yes, $64 in round-trip baggage fees for this flight (or $70 at the gate) would have been a 35% or so surcharge. If you book the bag when you buy your ticket though, it's less.