Even most experienced travelers don’t know much about Bulgaria, even though it’s one of the best—if not the best—values in Europe. It’s also got far more green space than most of the other more crowded EU countries.

This was the third stop on my Eastern European jaunt. (See Why Travel to Slovakia? and A Little Taste of Transylvania for the other round-ups.) As a writer, it’s the one I found most interesting, to the point there will be a story on my trip there in the next issue of Perceptive Travel. That’s because I went in with very few preconceptions and was happily surprised on a daily basis. Sure, it’s rough around the edges, but that’s a big part of the appeal: you don’t share any stretch of sidewalk anywhere with hundreds of package tourists disgorged from a tour bus or river cruise ship. Which leads us to the the first point:

In Bulgaria, you can still feel like an explorer.

When you get settled into a backpacker circuit these days, it’s easy to feel like you’re shuffling along a path so well-worn that it might as well be a moving sidewalk in an airport. Around you are hundreds, maybe thousands of people doing the same things you are, posting the same photos, just like thousands of people did before you got there. In Bulgaria, if there are a dozen foreigners in one restaurant it’s an anomaly. I only remember seeing one tour bus in mid-May, at the deserving UNESCO World Heritage Rila Monastery pictured below. With the strange alphabet, strange language, wide open spaces, and relatively removed geography, Bulgaria just doesn’t get the big crowds. Coming here still feels like an adventure. The newish trend of seeking out “slow food” destinations and “farm to table” restaurants gets a big chuckle here. That’s just the way everyone eats, all the time. Every house has a grape vine trellis and a little garden plot. Supermarkets are far outnumbered by open village markets and roadside veggie stands. People eat what’s in season and can/pickle for the winter, just like they always did. Despite eating a staggering amount of dairy—especially white cheese and yogurt—this is a much healthier looking population than the one I live with in the USA. I’ll do a post later on prices, but take my word for it that you’ll double-check your exchange rate calculations the first few times you see a menu. The wine and beer are consistently good too and rakia (liquor distilled from grapes, plums, or other fruit) is practically free.

One Third of Bulgaria is Protected Green Space

In much of western and central Europe, there’s very little old growth forest left and a lot of woodland has been replaced by an expanding population. In Bulgaria they still complain about the Ottomans cutting down their trees way back when and lament how the Soviets would have cut down more if it hadn’t been so much trouble and distance to transport the logs. I’m used to seeing a lot of deforestation in developing countries, especially where some people still cook over a wood fire, but here the mountains here are a rolling carpet of green and you constantly pass dense forests while on the roadways. This means… I was a guest of Odysseia-In Tour Company in Bulgaria. When you take a look at what’s offered on their Bulgaria Hiking site, it’s hard to believe you can do all this in a country most people can’t even find on a map. There are three major mountain ranges, two of them a short hop from Sofia, and you can do multi-day hikes staying in organized mountain huts with cafes or staying in villages guesthouses. You can hike around glacial lakes, visit painted monasteries, see ancient castles, pass roaring waterfalls, and take in the panoramic vistas. Besides the great experience, reaching nearly 3,000 meters, the prices are excellent. Around $100 per person or less for a guided tour with accommodation and 2 meals a day. Check out this hiking tour as an example. (And yes, you can set up snowshoeing or mountain biking if you’d like. Or a kayaking/rafting trip.)

The historic town of Plovdiv, with its Roman ruins and interesting architecture, gets more visitors because it’s an easy trip from Sofia. But if I could return to one spot in Bulgaria and linger for a while, it would be Veliko Turnova. Under different conditions, this is the kind of place that normally gets trampled in the blink of an eye. Just from the look and feel, you would expect it to be overrun with hostels and backpacker cafes in the tradition of Chefchaouen, Luang Prabang, Hoi An, San Cristobal de Las Casa, or Hampi. Then the adventurous independent travelers with more money would follow, and it would suddenly get on the radar of the glossy magazines. It would, that is, if more people knew about it and the town weren’t so far off the beaten track. It is on the train line from Istanbul to Bucharest though, so explore that option—just don’t tell everyone yet. Here’s what it costs to stay in a hostel there and my hotel with the great view below, Hotel Gurko, runs 35 to 60 euros double with breakfast. The Best Ski Deals in Europe

I visited in May, after the ski season ended, but I did spend a little time in one ski village and got a look at prices and the mountain trails. The most expensive walk-up one-day lift ticket in the country is under US$40 and that’s for a place where you can catch a gondola right in the center of town that takes you to the summit. Some are half that amount. I saw full equipment rental signs all over the place for 10 euros a day ($13). Think you can’t afford a ski chalet? Maybe you can here. In Bansko I saw multiple 1BR condos for sale for less than 20,000 euros, many larger ones with a view going for what works out to $60 a square foot. See more info here on Bansko.

Yes, there are some drawbacks. It’s not easy being a totally independent traveler here and canvassing the country unless you’ve got both a good phrase book and a good guidebook. There’s usually someone around who speaks English in places that get some tourists, but in others not so much and the alphabet takes some effort to figure out. Like many countries that were behind the iron curtain for decades, you see a fair bit of ugly architecture and buildings falling apart from the “fast and functional” construction. Overall though, Bulgaria is a breath of fresh air—often literally.

Get more info on the cheapest places to travel in the world – grab the RSS stream or subscribe by e-mail. 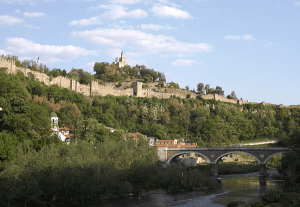 Hi Tim, After reading your article, I felt the need to thank you for describing my home country in a different perspective. Most of the travel bloggers writing about Bulgaria limit themselves to how cheap it is here, so thank you for pointing out more reasons, which make Bulgaria worth a visit.

I would just like to add a little correction to your hiking section as there are not three, but four major mountain ranges (Rila, Pirin, Rhodope and The Balkan - Stara planina).

If you are planning another visit to Bulgaria or any of the other Balkan countries, feel welcome to give me a hint - I'll be happy to help with suggestions and recommendations for the must see sites of the region. And if you decide to go for a road-trip, as this is really the best way to explore around, I can even hook you up on an awesome rent-a-car deal.

Yes, Bulgaria is a magnificent place, I am from Bulgaria and I have lived here my whole life. I have travelled to many places in Europe, and despite all odds,I still think that Bulgaria is one of the best places on Earth. It is just a piece of heaven, a small one,but deffinitely worth visiting. I am so glad to read your positive comments, the fact that foreigners acknowledge its beauty really makes me so happy.

Hello,pls I want to my trip to bulgaria,I want to get information about the country.I actually a footballer and I would seriousley need help at least someone whom can advice me on what to do for a better stay in the coumtry there.and I pray to God to help me as soon as I would enbark on my trip to the place. Pls I need your reply. Thanks.

Contact the Odysseia-In people linked in the article + get a good guidebook, and you'll be set.

Thanks for the Bulgaria posts. I work in tourism in Alaska and about 40% of our employees come from Eastern Europe, mainly Bulgaria. I am planning to visit next year and your research has provided valuable information.

Totally true. Nice article. Bansko Bulgaria is one of the best ski resort in Europe when it comes to value for money.