If you’ve ever had the bad fortune to have your laptop die in another country while you were traveling, or have had to replace a stolen camera, you have learned first-hand about the strange world of international electronics pricing. If you’ve ever been to the airport in Hong Kong or Panama City and wondered why you felt like you landed in a shopping mall, it’s because these duty-free zones are a bonanza for people who can’t get fair pricing at home. 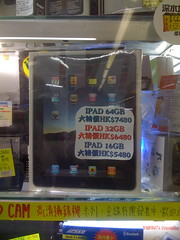 Wired magazine recently published a rundown of what a 16GB Wi-Fi iPad goes for around the world. As you might expect, only one place on the list had a cheaper price than the usual $499 in the United States—Malaysia was a tad less at $483. Here’s a look at other places on the globe.

As you can see, there’s no correlation between how cheap the country is in other ways or how high national GDP is in relation to others. So why the disparity? And why is it even worse with non-Apple items like cameras and laptops?

In most cases, you can chalk it up to protectionism, inefficient distribution, or both. When I lived in Mexico, for instance, I learned that goods made in the U.S. or Canada can be imported freely, thanks to NAFTA, but goods made in China get hit with a big taraiff. So even if it’s a product from HP or Whirlpool, the “Made in China” tag drives the price up. With most cheap electronics and apparel made in China these days, electronics are more expensive than they should be—in many cases 50 percent more than in your local U.S. Best Buy store.

In protectionist countries like Argentina and India, the government has made imports artificially high in order to protect the domestic economy. Research in Motion actually had to open a factory in lower Patagonia, Argentina to start making Blackberrys there—otherwise they wouldn’t make it past customs. A million books are sitting in containers on the docks and you can’t buy a Harley Davidson motorcycle no matter how much money you have.

When I first visited India as a backpacker, it was hard to even find a camera from Canon or Nikon. You had to seek out a specialist store that had a special import license. And you paid a fortune for the product. Things are better now, but when the government recently said it would allow big box retailers like Wal-mart and Carrefour in, with a local partner needing to hold a 49 percent stake, the outcry was loud and widespread.

In other countries, such as Korea and Japan, there are simply too many middlemen. For a product to get from dock to store, it goes through several hands, each adding their margin to the price. You’re paying for the pass-through.

There’s no easy answer to how to get around this except to wait until you’re in the right country to buy. My Spanish tutor in Mexico had one request when I was taking a quick trip to the U.S. for a conference. “Can you buy a camera there for me?” I did, and a model that would have been more than $200 in Mexico was $119 stateside.

In Australia, I paid 539. As a travel tip, if you are interested in electronics prices around the world, you should check out the website of the company that I work for: HuMuch.com. They provide -- free-- global price comparison

The netbook I paid $389 for in the U.S. was $700 in Seoul when I was teaching there. And it was made in Taiwan. You'd think the reduced shipping would help. But that doesn't seem to matter.