I’m back from my mini vacation in the Bahamas, which served its intended purpose of being a do-nothing break on the beach. There are times when all you want to do is lie on a lounge chair and have someone bring you cocktails, so when my wife said that’s all she wanted to do on this break, I ran with it. Besides, as someone who writes about how to do things better, I do need to see how the lemmings travel now and then so I can get a good feel of what to avoid. Like this picture: 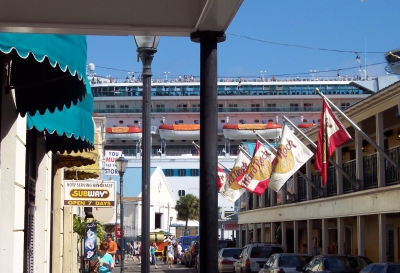 This is a cruise ship port that could be pretty much any cruise ship port. Most of them look eerily similar. So you’ll have to take my word for it that this is Nassau, in the Bahamas. This photo sums up what irks me about Caribbean cruises though: you’ve got your Hard Rock Cafe, you’ve got your Subway outlet, and believe me when I say the t-shirt shops have the same crap you see in every other seaside port city—only the wording changes (slightly). This one ship looming over the old streets wasn’t the only one either. There were four of them stacked up in the harbor, all disgorging 1,000+ gorged passengers. It’s a frightening sight. Thankfully we could retreat to our hotel and just watch them arriving and departing in the distance. 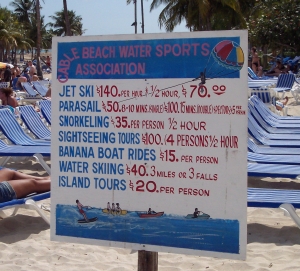 But the other problem with mass tourism places like this is that you have to work really hard to get a bargain. We did (more on that later), but take a look at these watersports prices at Cable Beach. Fancy spending the price of a hotel most other places for an hour on a jet-ski? You can snorkel around great reefs in Southeast Asia for hours for less than $10, but here it will cost you $35 for just a half hour.

If you told most of the people coming to these places they could go elsewhere and spend half as much, they’d be skeptical. They don’t know any better. Every trip they’ve taken has been to the Caribbean, Europe, or an Americanized resort area in Mexico or Costa Rica. They don’t really have to leave home: same drinks, same kind of hotel, pretty much the same food. But hey, that leaves less crowded places elsewhere for the rest of us.