Round about six weeks ago, I was having something that really can be called “the trip of a lifetime,” in the Okavanga Delta area of Botswana. I’ve put off writing about this supercalifragilisticexpialidocious trip for a while because, frankly, it had nothing to do with cheap destinations or budget travel. Botswana might be poor, but damn if they havn’t figured out how to attract wealthy safari-seekers by the score. I don’t fit into that group, I’m afraid, but I was reviewing hotels and writing an article for people who are willing to pay for the best. So I got to look at things through their eyes for a while. 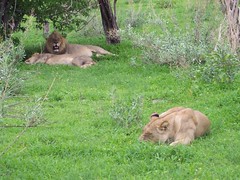 There is a clear lesson I got from the trip, which is that sometimes it makes sense to say “screw the price” and go have a great time. A safari in Africa definitely fits this category. I’ve heard more stories than I can count about terrible safaris that were either dead boring or close to deadly. I’ve heard backpackers talk about clueless guides, collapsing tents, toilet-paper strewn camps, and food that would make a starving man turn away and say, “no thanks.”

On this four-night safari trip I took, it was heavenly. Yeah, it would cost you the price of a ’99 Toyota by the time you factor in airfare, but man what a show! I got close enough to an elephant to almost stretch out and touch the tusks. We watched a giraffe munch on a tree for 15 minutes. We were close enough to lions to count the flies buzzing around their heads. There was never more than one other vehicle around, for five days. We took a walking safari one day and all we heard were the sounds of the bush: birds calling, hippos bleating, and in the distance, an elepant roaring. At Eagle Island camp, we went out through the reeds in a boat and saw a lion by the water, a dozen crocodiles, hippos that blocked our way, and more varieties of birds than I could count. 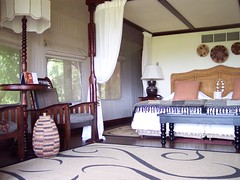 This is nice, but the real payoff from going in style is when you are back at camp. I was staying at several safari camps run by Orient-Express Safaris. Calling them “camps” is a bit like calling the QE2 a boat. The rooms are bigger than most people’s master bedrooms at home, and even nicer. Of course most people aren’t awakened in the morning at home by a man bringing a tray of coffee and tea to their deck. People don’t usually walk out to their deck, look up from the coffee press, and see eagles, antelope, and hippos going about their business. When people hear the word camp, they don’t normally imagine mouth-watering food, South African wine, and nice after-dinner drinks around the fire. 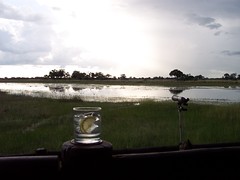 Too many people slave away at their job just to build up a bigger pile of stuff. A bigger house, a nicer car, and a fancier watch that ends up not making them a bit happier when it’s all said and done. Sipping a gin and tonic at my sundowner, hearing a chorus of birds and snorting hippos, I saw what you can really do with a pile of money: buy into an experience that will sear itself into your memory for a lifetime.