If you’re not convinced that your choice of destination will have the biggest impact on your travel budget, mosey on over to the New York Times’ travel articles. A recent one had a nice rundown on hip and stylish places that won’t cost you as much as a night at the Four Seasons, but for anyone who has traveled to any of The World’s Cheapest Destinations, $114 a night for a hotel with a shared bath seems downright warped. Other bargains in the article include a $107 hotel in Paris and a $124 hotel in L.A. with “Moroccan décor.”

I won’t go into what you can get for that amount of money in Morocco itself. Or how you could get a penthouse suite and all three meals for that price in most of Indonesia. But trust me when I say the price of a “bargain” room in these cities is near the top end of the scale in a few hundred other cities around the globe.

I can attest to the fact that anything under $200 a night is definitely a deal in Manhattan, however–I was just there last week. The three of us stayed at Radio City Apartments, right off Times Square. Convenient location, a clean 2-bed room bigger than the one at the W I had last time, a kitchenette, and only $155 a night. (Plus loads of taxes, including a $3 Javitz Center tax. Funny, didn’t realize I was there for a convention…) Of course meals cost a bundle, the subway’s up to $2, we shared a cab from Newark Airport for $60, my inlaws got two drinks at a hotel bar for $18, going to the top of the Empire State Building is $14, yada yada yada. Before you know it, you’ve spent an amount of money that would last you weeks in other spots on the globe. But it’s a great city, so you suck it up and keep opening the wallet. 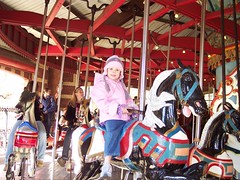 As New Yorkers will tell you though, the city is not without its deals. My daughter screamed with joy when she saw the carousel in Central Park. It put a big smile on my face too when I saw that it was only $1.25 a ride. Walking through the park was free of course, and beautiful at this time of year, with the leaves still changing colors.

Speaking of free, perhaps the greatest bargain of all is the ride on the Staten Island Ferry. We timed it perfectly and saw the city from the water 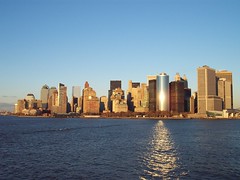 as the sun was going down, then the Statue of Liberty at sunset and when the torch is lit for the evening. I used to live up there and have seen it all before, but it’s still magical.